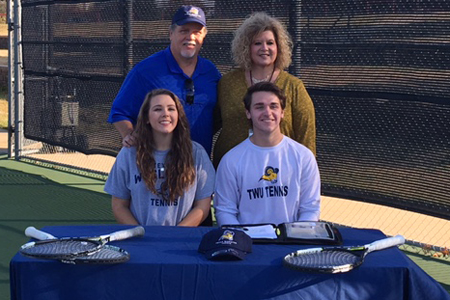 The Texas Wesleyan University Tennis program is expanding in the 2017-18 season to include a men’s program, and Head Coach Angel Martinez today announced the signing of his first recruit. Mace Brasher, the brother of current Lady Ram Maggie Brasher, will come to Texas Wesleyan as a freshman out of Colleyville Heritage High School.

“Mace is just the type of young man we are looking for to play at Texas Wesleyan,” Coach Martinez, said. “He is hard working, very strong in character and is an outstanding student. He will be part of a great foundation of players to bring back the rich history that TXWES has in men’s tennis.”

Brasher played No. 1 singles and doubles for CHHS as a junior and was named All-District in singles. An 18’s Superchamp, playing for coach Jeff Matlock, he placed third in the District in mixed doubles.

Martinez resurrected the women’s tennis program last season after Texas Wesleyan had not fielded either a men’s or women’s team since 2002. Under his guidance, the Lady Rams were immediately successful, posting a record of 11-4 and reaching the final of the NAIA Unaffiliated Regional Tournament, just one win shy of advancing to the NAIA National Tournament.

Maggie Brasher is currently competing as a sophomore with the Lady Rams. She was named ITA All-Academic and was also named to the SAC Commissioner’s Honor Roll as a freshman.

Texas Wesleyan University
At Texas Wesleyan, we have a rich history and a Texas-sized reputation. As stewards of the University, it is our responsibility to build a future as bright as our past.
Upcoming Events
Dec
1
Giving Tuesday
Dec
1
CETL Coffee Break 12/01
Dec
1
Using Blackboard Tests and Respondus software 12/01
Dec
3
Transition to Teams for Virtual Class Sessions 12/03
Dec
3
CETL Coffee Break 12/03
Dec
3
TXWES Eats: Holiday Edition