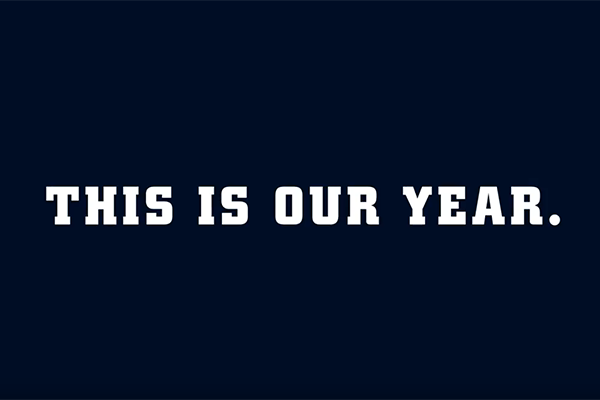 Texas Wesleyan University released today a new football hype commercial titled, “This is our year.” The commercial reveals the team’s official uniforms, features four players and will air during the Dallas Cowboys game on Dec. 26 and throughout the College Football Playoffs.

“Our players, our coaches, our fans – we’re all ready for 2017 and the return of Texas Wesleyan Football,” Head Coach Joe Prud’homme said. “We’re building a new tradition here – we put in the work this fall and are ready for full practices this spring. It’s been an exciting ride and we’ve only just begun.”

The team uniforms are by Adidas and feature navy and white jerseys with gold pants.

“This commercial does more than just reveal our uniforms; it gives our program a face – the face of real players,” John Veilleux, vice president for enrollment, marketing and communications, said. “The hype about TXWES Football is already here. Now, we’re building on that excitement and letting our fans know we’re just as excited as they are.”

The team will play its first scrimmage game, the Blue & Gold Game, on April 22. The team’s first home game is on Sept. 9.  The Rams schedule has been updated to reflect a new team, Oklahoma Panhandle State University, joining the Central States Football League. Check out the Rams 2017 football schedule here.

The University expects to announce the location for the home games and ticket sales in the spring.

As a key part of the Texas Wesleyan University’s 2020 Vision strategic plan, the university announced in February 2016 that it will reestablish its football program with a red-shirt leadership class that will begin practicing during the 2016-17 season. Games are scheduled to begin in the 2017-18 season.

The team will play in the NAIA's Central States Football League, which is composed of teams from four NAIA conferences.

The University is also exploring the possibility of developing a new stadium adjacent to campus through a collaborative partnership.