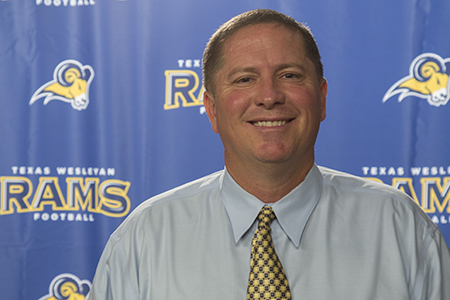 “Recruiting starts now,” Prud’homme said. “This is an opportunity to write history and build something special.”

Prud’homme previously served as head football coach at Nolan Catholic High School in Fort Worth for 24 years, where he built a perennial powerhouse in the Texas Association of Private and Parochial Schools (TAPPS) 5A division. During his tenure, the team won seven state championships between 2004 and 2013. Prud’homme was named Dave Campbell’s Texas Football’s Private School Coach of the Year in 2008.

Prud’homme said he intends to recruit students who have the talent to play at the college football level but have been overlooked by Division I recruiters.

Trachier underscored Prud’homme’s commitment to the same values that make Texas Wesleyan a unique, student-centered experience that puts education at the forefront of a student’s time at Texas Wesleyan.

“Joe is a truly phenomenal coach who has shown he knows how to build and sustain championship-caliber programs,” Trachier said. “He’s done that with student-athletes that have talent on the field and who excel in the classroom.”

The move from high school to the college level has presented great returns. Coaches like Gus Malzahn, Art Briles and Hugh Freeze had begun at the high school level and developed winning college programs.

“We’ve had interest in the head coach position from across the country,” President Frederick G. Slabach said. “We believe we have found a coach that will build a championship program and will bring great pride to Texas Wesleyan and all of Fort Worth.”

Prud’homme stressed his commitment to recruiting and educating top-tier student-athletes, underscoring the importance of a top-tier education and a great university experience.

“We’re going to build a team that wins the right way,” Prud’homme said. “When you are part of something special, it sticks with you forever.”