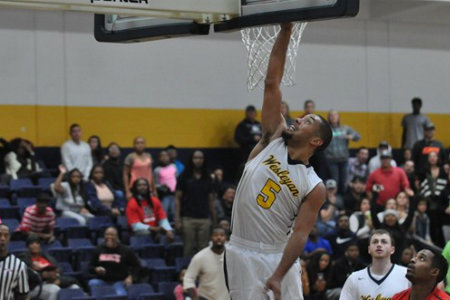 The 7th ranked Texas Wesleyan University men's basketball team clinched its first Sooner Athletic Conference (SAC) regular-season championship with a 78-66 win at Southwestern Assemblies of God University on Saturday, Feb. 20. The Rams are in their third season since joining the NAIA's toughest conference.

The Rams were challenged on Saturday as much as they have been during their current 13-game winning streak. Although the Lions led for much of the first half, the Rams were never rattled. Texas Wesleyan scored the final eight points of the half and trailed by just one at halftime. The Rams opened the second half with a triple and were right back on top.The Lions were unable to recover, and the Rams went on to win 78-66.

The Rams have won 13 consecutive games and seven in a row by a double-digits. The team is on its way to breaking the school record set in the 1940-41 season with 19 consecutive wins.

The Rams return to action at 8 p.m. on Thursday, Feb. 25 for their final home game of the season. They are hosting Oklahoma City University at the Sid W. Richardson Center gym.