Rams football in contention for a SAC title 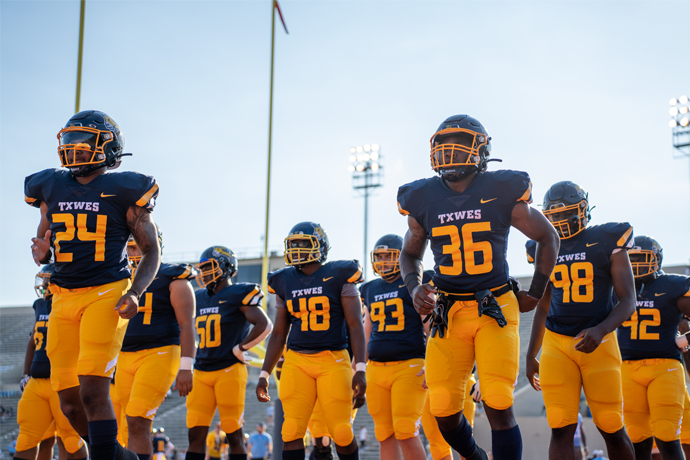 When you think of football teams in Fort Worth, it's easy to only think about the Big Guys. But did you know there is another team in Fort Worth in contention for a conference title?

After a 76-year hiatus, the Texas Wesleyan Rams are getting right back into the swing of things. In just the program’s sixth season back, Head Coach Joe Prud’homme has led his team to the top of the standings in the Sooner Athletic Conference and a top 20 ranking in the NAIA.

Last week, the Rams upset #20 Langston University’s (OK) bid for a conference title in spectacular fashion — blowing out the Lions 53-28 at home on Farrington Field. The Rams combined for 436 yards of offense while holding the Lions to their fewest points of the season.

The blowout against Langston isn’t a surprise — the Rams have been steady all season. Led by redshirt junior quarterback Dalton Dale, the Rams offense averages 45.3 points and 455.9 yards per game, good for second and third in the SAC, respectively.

In the Rams’ seven games this season, Dale has thrown for a total of 1,230 yards and 11 touchdowns while giving up three interceptions. Among starting quarterbacks in the SAC, Dale’s 151.6 QB rating puts him second in the SAC and his 52.3% completion percentage is good for fourth. Dalton is also a rushing threat — he totals 278 yards and 4 touchdowns.

The Rams receiving features seven receivers recording at least one reception per game. Of those, sophomore Jayson Price is Dale’s favorite target, recording 207 yards and three touchdowns on the season.

On the ground, the Rams are led by running back Ernest Ceasar III. In seven games played, the sophomore has amassed 843 yards and 10 touchdowns. Add to that his three touchdowns through the air, and you have the SAC’s leading scorer. Ceasar firmly holds first place in the SAC for touchdowns scored at 13.

Offense may sell tickets, but defense wins championships. The Rams defense has held their opponents to 261.3 yards and 13.1 points per game — both of which lead the SAC. They also hold opponents to under 50 yards on the ground and lead the SAC in sacks (28) and interceptions (12, including three pick-sixes.)

In the backfield, defensive lineman Kobe Adams is having a record-setting season. The junior leads the SAC with 16.5 tackles for loss and six solo sacks. Combined with junior linebacker Jose Bonilla’s three solo sacks and six tackles for loss, the Rams are the best in the SAC behind the line of scrimmage.

The Rams return to Farrington Field on Nov. 5 for a non-conference game against North American University.