From the Magazine: Texas Wesleyan campus life is back! 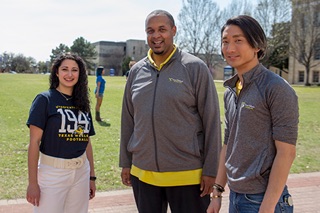 Newly minted freshman Cameron Bennett was just doing his thing at orientation: bouncing from table to table at lunch, chatting everyone up. Eugene Frier, assistant dean of students for student engagement, took note.

Once the semester got underway, Frier asked his staff to see if Bennett might want to get involved in campus leadership.

A year and half later, Bennett is a member of SGA, president of the Ram Squad, Student Life Ambassador and active in the residence halls.

“The level to which he is involved is because of that invitation,” Frier says. “We recognize that we have to invite people, we have to give them permission to be part of the community.”

Welcome to campus life 2017. Today’s Texas Wesleyan is all about creating a vibrant, involved intellectual community that practices what it preaches: Smaller is smarter. Or put another way: Creating the world you want to live in is a face-to-face, community-building activity.

So the Student Life staff is laser focused on finding myriad and creative ways to develop one-on-one relationships across campus.

“Everyone looks back at their graduation with fondness, but cherish the moments when they were studying at 2 a.m. and everyone’s laughing about something that isn’t even funny,” Frier says. “It’s those kinds of moments we want to help create by putting relationship building as a core responsibility.”

When President Frederick G. Slabach laid out strategic plans for the university in 2013, the student experience was a major focus. Two of the four goals target campus life: get students involved and get more of them living on campus.

So far so good on the infrastructure: The 531 beds on campus are filled and next year single rooms will become doubles in Elizabeth Hall so those on the waiting list can be accommodated. The new Nick and Lou Martin University Center will give students a 21st-century family room and more incentive to live on campus.

Getting students involved is more complex, but the staff has a multi-pronged plan they began more than a year ago that is already making a significant difference in everyday living on the 127-year-old campus.

Their initiatives range from casual weekly gatherings like Waffle Night in Stella Hall, to board games in their offices to turning student orientation into a two-day celebration of Ram-hood. They have revitalized the Student Life Ambassador group; added a national fraternity, Delta Sigma Phi; increased intramural sports; started an Alternative Spring Break; developed a slew of new events and initiatives and helped students create or revitalize 10 new groups, like the Student Veterans and Love Your Melon, a national initiative that knits hats for kids battling cancer.

David Monge, coordinator for student organizations and Greek life, has only been on campus a year, but he has seen a dramatic shift in the intangibles: energy and excitement.

“There’s been an explosion of activity in programs and in groups,” he says. “Football certainly has an impact on that, but students seem to recognize they have the opportunity to grow something special here. I think that is really important.”

“We tell students that if they want to do something, they have the chance to make it happen,” Monge says. “And they are.”

Tristeza Ordex-Ramirez is one of those students. The former U.S. Marine drill instructor had started a Student Veteran’s group at Tarrant County College South Campus and wanted to replicate it at Wesleyan. She’s already recruited 12 members. More than 80 people showed up for their TexWes Student Veterans Marine Corps Birthday Run in the fall, including the softball and baseball teams and some active duty and reserve Marines who called cadence as they ran the 2.5 miles.

“I started this group because my adviser, Dr. [Michelle] Payne, said if you want to see change, you have to do it yourself,” Ordex-Ramirez says. “Student Life was very helpful getting it started and extremely supportive since. They come to events, volunteer and even bought t-shirts at our run.”

Some students don’t want to belong to a group or serve in leadership, but they, too, want and need friendship and a home on campus, Frier says.

“We must make sure than no one feels ‘other’ or is pushed to the fringes of our community,” he says. “So we’ve taken a very intentional approach this year to focus on relationships across campus. We want to help everyone find their place.”

They are doing it through small acts of kindness and attention.

“I’m very proud of how my team has focused on hanging out with students and spending time with them,” he says. “One brought in board games and now we’ll see seven to 10 students in the office playing games.”

One staffer does meet-and-greets with the athletic teams in their offices; another got popcorn and drinks to bring folks together and make connections.

Then there are the fun, seemingly inconsequential activities that encourage volunteerism and service on a small scale. The Thank You Notes activity had staffers sitting on the mall with paper and pens and asking students who they would like to thank, then encouraging them to sit down and write a note. One helped students create buckets of mints with compliments on them that gave people lots of smiles. Another put toy army men around campus with a request to pray for the people serving our country.

“This is what it’s like to have a community on campus, more of a family,” Frier says, noting that these small efforts are bonding opportunities for everyone, even the commuters. “We have lots of students who don’t live on campus and still want to get involved, so we’re trying to find ways to engage with them more.”

Greek life is getting new attention too, and membership grew by 40 percent this year. Yoni Cardos-Carmona is one of its cheerleaders. She was a shy and nervous first-generation college student when she arrived on campus in 2015. At the request of a friend, she reluctantly went to a sorority recruitment event and is now a proud member of Alpha Xi Delta.

A year and a half later, Cardos-Carmona acknowledges that she has been transformed by her sisters in the sorority, as well as by the warm embrace of campus life at Texas Wesleyan University.

“I thought Greek life was all about parties and so didn’t think I was interested,” she admits. “But when I showed up they told me what they stand for. It’s about making genuine connections and supporting each other.”

Cardos-Carmona is not only an vocal proponent of Greek life, the once reticent sophomore is part of the Ram Squad, active in the student creative writing group and hopes to be an orientation leader in the fall — as well as campaign for leadership in her sorority.

“College can be a scary experience,” she admits. “But if you get involved, put yourself out there and meet new people, it’s so worth it. These friendships are so meaningful and you’ll never lose these memories.”

A place to call home

There’s a thread of an idea running through everything that Student Life is doing to reinvigorate the community: A campus that plays together stays together.

Students, especially those who are on the bubble academically, will fight to stay in school if they feel they belong, Frier says, which will mean better retention numbers and more successful graduates.

“Regardless of the macro reasons students are here, people want to have their group, their tribe,” he says. “So we are helping everyone understand that ‘Smaller. Smarter.’ isn’t just one thing.”

“We want everyone to know that there’s a place for you to engage and connect here. We’re here to help them find that entry point.”

By Nancy B. Strini