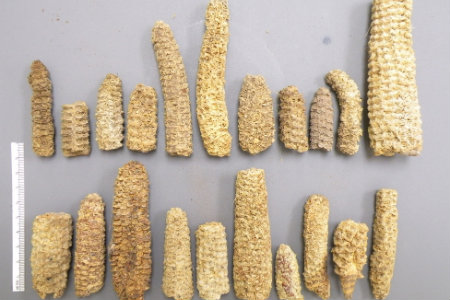 Above: Twenty-one corncobs from Turkey Pen Shelter, Utah, from which ancient DNA illustrated incipient adaptation to a short growing season.

Bruce Benz, Ph.D., professor of biology at Texas Wesleyan University, and collaborators from the U.S. and Europe, characterized the genetic adaptation of ancient maize from Utah to the short growing season of temperate climates. Their paper, “Genomic estimation of complex traits reveals ancient maize adaptation to temperate North America,” is published in the August 2017 issue of Science magazine.

The genetic reconstruction is based on an ingenious analytical approach that demonstrates incipient adaptation of maize to a short growing season.

“This evolutionary accomplishment very likely set the stage for indigenous maize agriculture in the U.S. and Canada, that later enabled the earliest American settlers to persist along the eastern seaboard and, much later, catapulted the U.S. onto the world stage as the premier corn producer,” Benz said.

Benz has researched the evolution of maize throughout his career, in what began as an early childhood interest.

“During my childhood, my father extolled the virtues of corncobs, relating their many practical uses,” Benz said.  “Throughout high school, my parents farmed me out during the summers to help on the family farm in eastern North Dakota. Corn agriculture was a difficult proposition when I was in high school because of the short growing season.  Indigenous varieties of corn produced in the 90-day, frost-free season typical of eastern North Dakota, but the hybrid varieties, favored by industrial farming, required more time to flower and set seed.”

“Many years later, I told my father the story of corn’s evolution from a tropical wild species that resembles corn in many ways except where and how it produces grain – the corncob’s predecessor.  Neither he nor I would have expected corncobs to be so revealing.”

Benz has been a professor at Texas Wesleyan for 20 years. His research interests include: Population Biology of Texas Endemic Plants; asthma in Tarrant County, Texas; the origin and evolution of maize; origins of Mesoamerican agriculture; ethnobotany of the Sierra de Manantlán Biosphere Reserve (SMBR), Jalisco, Mexico; in situ crop plant germ plasm; and forensic analysis of the Huitzilapa Shaft Tomb.