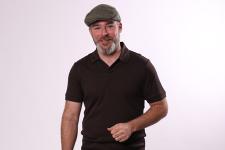 Associate Professor of Criminal Justice Greg Gullion has interviewed more than 2,300 dangerous minds from around the globe, but it's his passion for teaching classes on gangsters, criminals and serial killers that makes his heart beat.

Usually, Gullion asks the questions. But, after returning from a summer research trip with Interpol (International Criminal Police Organization), the former LAPD criminologist and international organized-crime fighter let us interrogate him for a change.

How have this century's U.S. gangs changed?

"Gangs today are much more violent and more involved in drugs than, say, the gangs of the Public Enemy Era. During the Public Enemy Era of the 1930s, Al Capone pretty much owned Chicago. There were less gangs, so less competition. Today, the number of gangs has grown so much that cities and neighborhoods are divided by streets and the gangs that control them. Also, the fact that gangs today are more involved in drugs makes them more violent. There is more money at stake."

Is the East Coast vs. West Coast rivalry of the '90s still strong?

"Many people don't realize this, but that rivalry was fabricated for rap music and selling records. Gang rivalries are much more localized.

For example, on the West Coast, gangs compete with transnational gangs and domestic gangs (like Bloods, Crips and the international MS-13). On the East Coast, gangs also compete with other local gangs, rather than gangs on the other side of the country."

Is the mob alive?

"Very much so. The Mafia today has strong presence in cities such as New York, Chicago, Detroit and Los Angeles. They are primarily involved in racketeering and money laundering."

"The students — seeing their success in class and after graduation. We have former students working in Los Angeles, New York, Portland, Dallas-Fort Worth and internationally fighting organized crime."

What do criminal justice majors need to learn most?

"They have to know how to think for themselves, solve problems and write. Being a police officer or detective requires much more than standard procedures at a crime scene. They have to analyze and process information and know what questions to ask. It is also extremely important to know how to write. I've seen guilty felons walk free over a misspelled word in a police report."

What is your favorite thing about Texas Wesleyan?

"I love University College Day. I think the presentations are outstanding and an important part of learning. Even the brightest and sharpest students need practice presenting in front of large and small audiences. I once had a student throw up before a session because he was so nervous! We have a lot of fun, too, and usually draw a good crowd. Some past presentations include Jack the Ripper and the Public Enemy Era."

Learn more about being a criminal justice major at Texas Wesleyan: