Wesleyan alumnus 'wastes' no time getting down to business 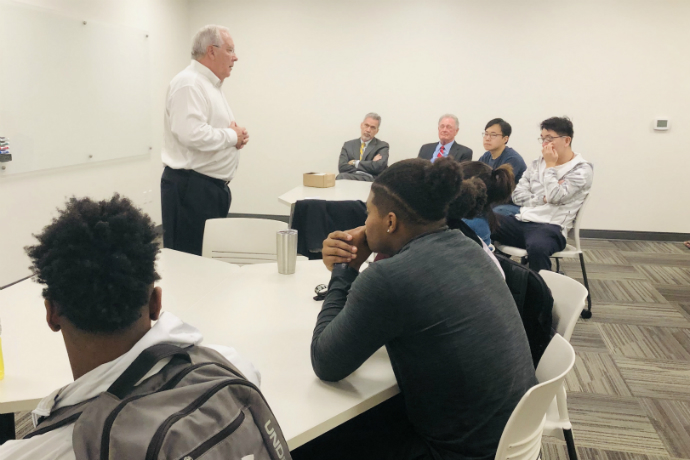 Texas Wesleyan alumnus, Kerry Getter, shared his entrepreneurial journey with current business students Wednesday, Nov. 30 at the Jack Morton Business Accelerator. After graduating from Texas Wesleyan with a political science degree, Getter worked alongside his father in the family business which was later sold to Waste Management, Inc.

After the sale of the family business and a brief career with WMI, Getter and his wife, Becky Getter, moved to Austin and started Balcones Resources. Getter reminisced on this day in 1994 when they started the business with only a pen, a pad of paper, and an outdated IBMX-T computer. They hit the market at the perfect time and generated a good profit, but that wasn’t the end of it. “We thought we were smart, but we did the same thing the next year and almost lost everything that we had,” Getter said.

Luckily, they learned from their mistakes and proceeded to create a successful business as the company is now one of the top 50 recyclers in North America.

The Getters stayed true to the business basics and honed their communication skills (both verbal and non-verbal) while following the idea to nurture the mind, body, and spirit which they still follow today.

Before owning his own company, Getter had many jobs from being an MLB pitcher with the Texas Rangers to working for Waste Management, Inc. to develop the recycling structure for the Southwest region. Prior to this role, he spent time in the banking industry with his first job finding him manually rolling coins.

“I hated my first day. I couldn’t picture myself wearing a tie for the rest of my life.” Getter said.

Despite his initial impressions, Getter believes the banking business was a wonderful entry-level position recounting his strong disdain for neckties. He still won’t wear a tie even in his role as a successful business owner.

When asked if he ever regretted becoming an entrepreneur, Getter immediately answered yes with a joking laugh.

“You can’t take a day off. Recycling comes every day!” Getter said.

“Return phone calls in a timely manner. Text messages and emails are very low on the scale. Nothing beats a visit, phone call, or hand-written message.”

“Pay bills on time. Pay people on time. That makes room for revenue.”

“Keep up with current events.”

“Do what you say you’re going to do. I learned that from my father and I’ve lived by it ever since.”