Stephanie Varuska is paying it forward 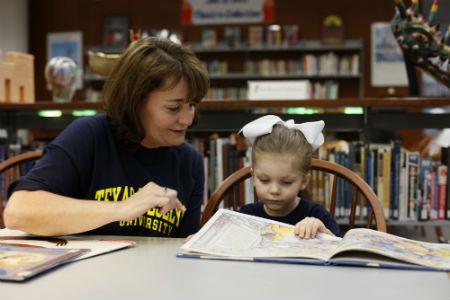 When Stephanie Varuska first stepped on a college campus, it was as a 41-year-old mother.

Eight years ago, while enrolling her daughter at Weatherford College, she decided to give college a try.

It wasn’t a new idea for her, just one she thought she could never accomplish.

“I’ve learned that it is important to put yourself in uncomfortable situations, in order to grow,” Varuska says.

So, “uncomfortable” is what she did. She enrolled in classes at Weatherford College. Varuska was ready – she had come to learn that she could only go so far in her career without understanding business. College was the next step.

Varuska earned her associate’s degree from Weatherford College in 2014 and enrolled in Texas Wesleyan in the fall of 2014 as a marketing and management major. She will graduate in the Spring of 2018.

Varuska says being on a college campus keeps her young.

“I draw so much energy and positivity from the kids on campus. I came here a little cynical, I’ll admit. But being with my young classmates has helped me to begin to see the world through their eyes,” Varuska says.

Giving back through teaching

Varuska says that getting a college education has given her confidence and has been the most “self-satisfying and life-changing” experience she has ever had. So much so, her career ambitions have changed. Now, she wants to continue her education so she can eventually return to Texas Wesleyan as a professor, and give back to the school and students.

“They used to say that women go to college to meet a man – well, I met the right man at Texas Wesleyan. Professor Tom Smith,” says Varuska. “I first met Dr. Smith [who retired last year] at orientation. He was my advisor, helped me register for classes and put me under his wing. I wouldn’t have made it this far without his encouragement and support.”

Varuska has immersed herself in student life at Texas Wesleyan. She is secretary and treasurer of the Beta Gamma Sigma business honor society and is a member of Alpha Chi, the university honor society.

Even more impressive, she is a member of the Texas Wesleyan Enactus Team, an entrepreneurship club that works with local start-ups to help them with business needs. The team recently won the Coca-Cola Foundation’s “Uncap Opportunities for Women Challenge” grant, which included $7,500 to further their social entrepreneurial actions for women empowerment.

As a member of Enactus, Varuska, with classmates Joy Smith-Nelson and Tommy Lee, have conceptualized an idea for their own start-up organization. Smith-Nelson and Lee are also non-traditional students and together, the three hope to start a nonprofit to support students like themselves navigate the college experience – one that is traditionally catered to 18-22-year-olds.

All in the family

Varuska spends her free time with the light of her life, her 3-year-old granddaughter, Braleigh.

“I want to set my granddaughter up for success in life, starting now,” says Varuska. “I study when I’m around her, and am trying to teach her about the importance of an education. As soon as she’s old enough, I’m sending her to math camp!”

A smile washes over Varuska’s face as she says, “Braleigh truly is my driving force.”

And driven she is. After graduation, Varuska plans to get her masters in marketing analytics and then a doctorate degree. She is grateful for the support she has received at Texas Wesleyan, and that she will graduate nearly debt-free, thanks to this scholarship and others.

“I want to pay it forward,” Varuska says.

The Business Hall of Fame is a partnership between Texas Wesleyan University, the Fort Worth Business Press and the Fort Worth Chamber of Commerce. The event recognizes a Business Executive of the Year, an individual who has made a profound impact on the business world and promotes business as a challenging and dynamic profession.

Texas Wesleyan University
At Texas Wesleyan, we have a rich history and a Texas-sized reputation. As stewards of the University, it is our responsibility to build a future as bright as our past.
Upcoming Events
May
26
Summer Institute 2022
May
26
CETL 2022 Summer Institute
Jun
10
Rams Football Golf Tournament