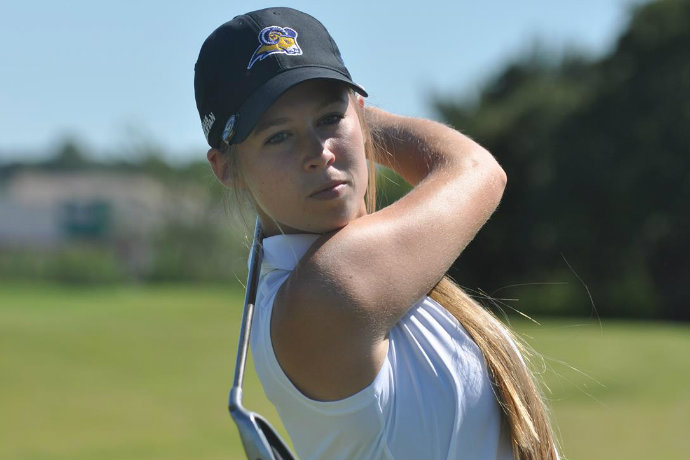 For Texas Wesleyan senior Jaci Trotter, there is a common thread between school, golf and life as a whole: family. A native of Santo, Texas, a small town about an hour west of Fort Worth, Jaci grew up in a house with her parents and four siblings.

“My parents, throughout my whole life, have been my biggest supporters,” Jaci said. “If they weren’t in my life, I would not be where I am today.”

Jaci says she started playing golf as a high school freshman, not because she wanted to, but because her dad wanted her to.

“Because that is his favorite sport, and he said everyone should experience it at least once,” Jaci said. “He said I could quit after my freshman year if I didn’t like it.”

She didn’t quit. In fact, she got better with every tournament and was named team MVP in all four years at Santo High School before joining the women’s golf team at TXWES.

Her family also proved to be one of the deciding factors in choosing Texas Wesleyan over other schools. Her cousin was on the men’s golf team and graduated with a degree in accounting from the School of Business Administration, and he wasn’t shy about how he felt about his alma mater.

“The way he talked about Wesleyan … I could see how passionate he was, and I was interested.”

So Jaci decided to come to campus herself. She met faculty members and staff. Then, she was hooked.

“I really liked the ‘Smaller. Smarter.’ idea of Texas Wesleyan,” Jaci said. “They emphasized how you can talk one-on-one with your professors rather than if you were at another university.”

Her journey to SOBA

It would take Jaci longer to settle into finance as her major. She actually didn’t know what major she wanted to choose on her first day of her freshman year and eventually started in exercise science-but by the end of her sophomore year, something just didn’t feel right.

“Throughout those two years, I just wasn’t feeling like that was something that was right for me.”

That’s when Jaci started exploring the other majors Texas Wesleyan had to offer. During her search, she remembered that her cousin studied accounting – the very same cousin who got her hooked on TXWES in the first place. That led her to taking a closer look at SOBA.

“I looked into the School of Business Administration and chose finance. And once I did, got plugged into my classes and started working there (as an office assistant), I realized that finance was where I wanted to be.”

Jaci says it was her advisor, Associate Professor Shengxiong Wu, that led her to choose finance as her major.

“I know any business major I would have chosen I probably would have enjoyed. I think another reason why I chose Finance was Dr. Wu. The way he talked about Finance and the career paths I could take interested me.”

Jaci says she was surprised and thankful when she found out she was the recipient of the Thomas H. Law Scholarship.

“I think this scholarship will not only help me finish my degree, but I can also use it as a great achievement to put on my resumé to help me pursue a career in finance.”

And she’s well on her way. Jaci already has an internship opportunity this summer at Austin-based 49 Financial, where she will shadow a financial advisor and take on some duties.

As she prepares to leave TXWES as a graduate in December 2019, she has a piece of advice for SOBA students like her - advice that works with any student.

“You cannot go wrong by getting involved. Whether it be working in the School, being in the Finance Club, the Accounting Society or Enactus, all these programs not only help you build relationships with professors and fellow students, but will help you when pursuing your career.

Jaci Trotter is the 2018 recipient of the Thomas H. Law Scholarship, which is funded by proceeds of the annual Business Hall of Fame.

The Business Hall of Fame is a partnership between Texas Wesleyan University, Fort Worth Business Press and the Fort Worth Chamber of Commerce. The event recognizes a Business Executive of the Year, an individual who has made a profound impact on the business world and promotes business as a challenging and dynamic profession.