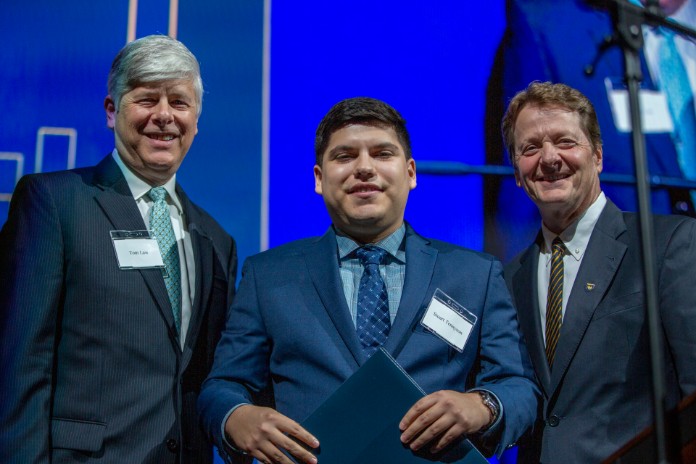 You could say that Stuart Tennyson, the 2019 Thomas H. Law Scholarship recipient, is training to be our next great superhero. But the villain he is trying to take down is not the one you’ve seen at the movies. His goal is to take down fraudsters.

“I like catching the bad guys – the people who are doing things that aren’t right and who are defrauding shareholders and creditors - that’s fun to me.”

Stuart, a senior majoring in forensic accounting at the Texas Wesleyan School of Business Administration, says he didn’t know what path he wanted to take in the business world when he first arrived on campus. But one of his professors, Thomas Tolleson, Ph.D., opened his eyes to the world of accounting and helped spark a passion for it.

“There is so much going on in the world today. We have tons of fraud and it interests me. Dr. Tolleson really pushed me in that direction and showed me the great things you can do in the industry, including the fun you can have in accounting.”

Stuart says it was a different professor, Meghan Wright, Ph.D. that urged him to apply for another scholarship, the Hatton W. Sumners. It’s a moment that he says was uniquely TXWES.

“I had never had an intent to apply, but she really pushed me and I got it. It’s a big credit and thanks to her but I don’t think that would happen anywhere else. There isn’t that level of connection on other campuses between students and professors.”

The path to Stuart being named this year’s Thomas H. Law Scholar isn’t all that different. He says that Dr. Tolleson suggested Stuart in a business staff meeting.

“It’s an honor just to be recognized by my professors. I’m really grateful. It’s going to go a long way toward my last semester and finishing school without any student debt.”

Stuart says after graduating, he’s returning to Texas Wesleyan to pursue his MBA, a move he says is the next step in furthering his career. And he’ll be doing it at the place that he says is best for him.

“'Smaller. Smarter.’ really happens on this campus. Literally every professor I’ve had from general education to my major has known my name and they have tried to learn my story. I don’t think I could have made a better choice.”