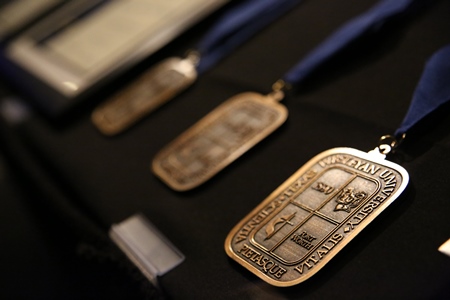 Tim Carter, a retired banking executive, is a respected leader in business and the community and a longtime friend of Texas Wesleyan, serving on the board of trustees for more than 20 years.

Carter began his banking career in Houston in 1977 and progressed through various commercial lending and managerial positions. In 1992, he was named president of Texas Commerce Bank - Fort Worth. Carter served as Chairman of Chase Bank Fort Worth (formally TCB) beginning in 1998 and left Chase in 2001 following its merger with JP Morgan.

Between 2001 and 2007, Carter served as president of the Harris Methodist Health Foundation and President and CEO of the United Way of Metropolitan Tarrant County.

Carter joined OmniAmerican Bank Fort Worth in 2007 as President and CEO. In that role, he directed the bank’s transition from a mutual savings bank to a NASDAQ publicly traded company in 2010. Carter then guided the bank through its merger with Southside Bank in 2014.

Tim Carter retired from his position as president, North Texas region of Southside Bank in 2018. He now serves as a board member for Southside Bank, headquartered in Tyler, Texas.

Carter’s community involvement is as extensive as his professional accomplishments. He currently serves on boards at Texas Wesleyan, the Federal Home Loan Bank of Dallas, the North Texas Tollway Authority, Safe Place and the Fort Worth Promotion and Development Fund.

Carter has proved his willingness to serve his community, not only through business, but also through government service. He was elected Bellaire City Councilman in 1986 and served as mayor from 1988 to 1992.

Carter earned a Bachelor of Business Administration in Finance from the University of Texas and was a four-year letterman in swimming.

About the Alumni Medal Dinner
Each year, Texas Wesleyan University honors distinguished alumni and friends. Their achievements and contributions are amazing reflections of the University, and we are honored to celebrate and recognize them each year.

This year’s Alumni Medal Dinner will be held in the Martin University Center on Friday, Oct. 29. The reception begins at 6 p.m., followed by dinner and program at 7 p.m.

The event is open to all alumni, friends, faculty and staff, and tickets are $65 per person. Register online by Oct. 18 to reserve your seat and be sure to register for other homecoming weekend activities as well.