Judge Sergio De Leon '98 serves in the courtroom and community 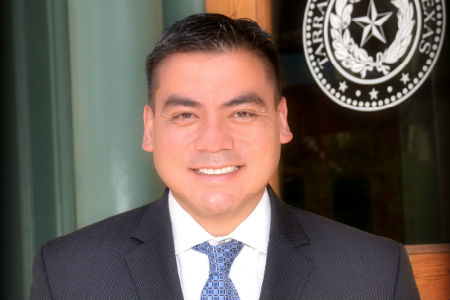 Judge Sergio De Leon ’98 came to Fort Worth in 1992 to coordinate then Governor Bill Clinton’s presidential campaign in Tarrant County. He then went on to receive a Bachelor’s degree in Political Science at Texas Wesleyan University and was elected Justice of the Peace, Precinct 5 in 2012. A few of his professional awards and accomplishments include the 2015 Lake Como Community Service Award; 2014 re-election as Justice of the Peace to Precinct 5, Tarrant County, Texas; and the 2013 Hispanic Heritage Award.

De Leon has come a long way since his days at Texas Wesleyan and his vision of serving both the court and the community has become a working reality. When asked how Wesleyan helped him to get where he is today he replied, “Texas Wesleyan gave me a quality education which enabled me to excel in my career field – first as Precinct 5 Tarrant County Constable and now as Justice of the Peace. Also, Wesleyan has an extensive alumni network and I was able to tap into that to build support for campaigns.”

Wesleyan Memories
De Leon’s most memorable experience at Wesleyan was in the Fall of 1996 when the Lambda Kappa Kappa Fraternity brought in U.S. Senate Nominee, Victor Morales, who had gained national and international attention in his campaign against U.S. Senate incumbent Phil Gramm to speak to LKK members, students and the community. They filled up the Law Sone Fine Arts Building and then Wesleyan President Jake Schrum introduced the guest speaker. This was the first time President Schrum had attended one of LKK’s events. They received news coverage in The Collegian and the Fort Worth Star Telegram.