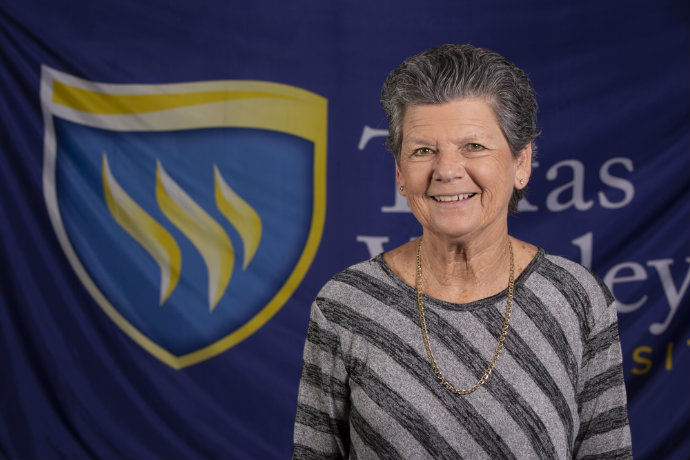 Sarah grew up in Commache, TX where she began her athletic career under the guidance of this year’s Distinguished Alumna recipient, Coach Leta Andrews. Sarah attended Weatherford College where she qualified for the inaugural 1975 Women’s Basketball National Junior College Championships and earned her Associate of Science Degree. Dr. Ed Olsen recruited Sarah to play basketball, but she was quickly convinced to play basketball, volleyball and softball, earning various team and tournament awards including Women’s Basketball MVP her senior year, while earning a Bachelor of Science in Education.

Sarah Croft began her career as a Math teacher and Girls General Assistant Coach at Everman High School upon graduating from Texas Wesleyan in 1977. Two years later, Sarah was named Girls Athletic Coordinator and Basketball Coach for Mansfield High School. After a highly successful stint at Mansfield, she moved to many other successful coaching experiences around the state.

After earning a Master’s Degree in Administration from Texas A & M University, Sarah transitioned to public school administration with San Antonio ISD. She served many roles at the campus and district levels, acquiring extraordinary levels of expertise in campus leadership, school improvement processes, and the Texas State Accountability System.

Sarah developed a particular depth of knowledge and skill in launching schools that are designed specifically to serve the most at-risk student population. The intent to graduate those students from high school prepared for college and career opportunities.

Upon her retirement in 2009, after thirty-five years of service to Texas Public Schools, Sarah established Croft Educational Consulting Services. She has integrated all those experiences into coaching skills that have supported over eighty public and charter school campuses and leaders in her work as a Leadership Coach throughout the State of Texas.

Sarah lives in San Antonio, Texas and travels back to the Comanche area often to visit her family. She is a devoted San Antonio Spurs Fan and Season Ticket Member; a member of the Wesleyan President’s Council; supports the San Antonio Food Bank; the Tobin Center for the Performing Arts; and several other charities. On a final note, as Coach Bounds would have approved, Sarah has become an avid golfer and has played many of the great courses nationally and abroad!

Each year, Texas Wesleyan University honors distinguished alumni and friends. Their achievements and contributions are amazing reflections of the University, and we are honored to celebrate and recognize them each year.

The Alumni Medal Dinner is at the Colonial Country Club on Friday, Nov. 2. The reception begins at 6 p.m., followed by dinner and a program at 7 p.m.

The event is open to all alumni, friends and faculty and staff, and tickets are $65 per person. Register online by Oct. 26. Be sure to join us the following day on Sat., Nov. 3, for the Wesleyan 5K and other Homecoming Weekend festivities.

For questions, contact the Office of Alumni Relations at 817-531-6548 or alumni@txwes.edu.