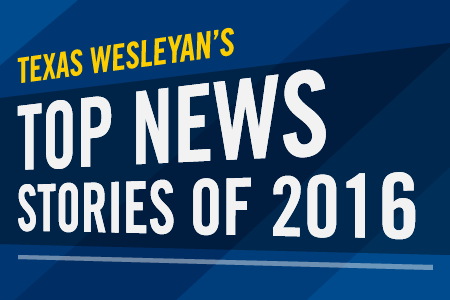 What were Texas Wesleyan’s biggest news stories of the year?

If you guessed football, you’re right on.

In Feb. 2016, the Rams announced that after a 75-year hiatus they would be returning to the gridiron and the buzz has continued ever since. Sports enthusiasts from New York to Abilene to L.A. have read, listened-in or watched stories about the revival of the program and heart-warming stories from coaches and our leadership class. 2017 promises to be another year of football headlines – and many touchdowns.

Other major headlines included this fall’s record-setting move-in day and the announcement of the Nick and Lou Martin University Center campaign – both key parts of the 2020 Vision strategic plan and exciting stories that captured the momentum we’re all feeling on campus.

7. “500 students moved in at Texas Wesleyan – one of the largest moving days in university history” - WFAA/ABC, KTVT/CBS, KXAS/NBC, Aug. 14 – link not available

Faculty experts In the News

Many thanks to all of these professors for participating in interviews and supporting Texas Wesleyan’s efforts to drive our “Smaller. Smarter.” brand and reputation.

Jasna Rather and her stellar table tennis team did it again this year, winning their 13th national championship in 12 years. The team was featured live in-studio at WFAA for Good Morning Texas on March 29. Regional play heats up early in 2017 and we’ll be watching to see if the Rams will do it again.

Story rankings are based on size, placement and audience reach.