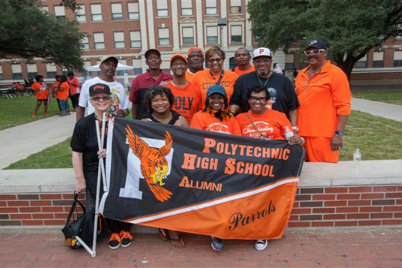 Polytechnic High School is proud to announce its annual Homecoming Parade. This year’s event will kick-off at 11 a.m. sharp on Saturday, Sept. 30, from Poly High School. Poly extends an invitation to all Texas Wesleyan organizations and departments to join.

Talk about a grand entry! Leading off the parade will be one of two mounted riding clubs carrying the American Flag, Texas Flag and Poly Flag, as all flutter in the air. Early entries so far feature vintage/ antique/ muscle cars, two mounted riding groups, a fire truck, six alumni floats, Homecoming Queens from various decades perched on back of convertibles, Mr. & Mrs. Claus in Santa’s sleigh, The Pride of Poly Marching Band, cheerleaders, athletes, JROTC, AVID, and more, more, more. Polys Pyramid Schools are anticipated to be a part of Polys HC Parade which will add to the excitement and merriment of this annual event. All of this will make for a super fun parade for Poly High School, its pyramid schools and the Poly community.

Sound like a good time so far? You can be a part of this parade! Poly extends an invitation to all Texas Wesleyan organizations and departments to join the parade.  Those wishing to enter with a decorated truck or car, float or even walking/marching groups are to contact either of Poly's point persons prior to Sept. 1:

If not participating in the parade, then join in as a spectator. Last year, there was an estimated 300+ spectators that lined Rosedale.

Poly's HC Parade will have something for everyone...Join us!