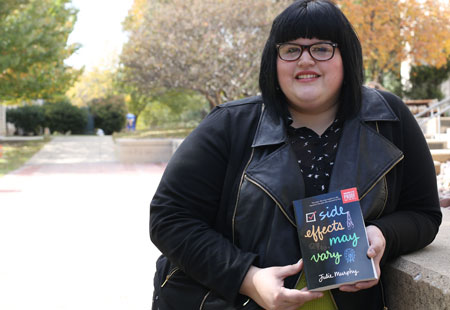 Julie Murphy '10 came to Texas Wesleyan University with her sights set on being a political campaign strategist and speech writer.

Now almost three years since graduating with a degree in political science, she’s experiencing a tremendous amount of success as a writer, but not in the field she imagined.

Murphy realized she might have a future writing novels, not speeches, one semester while taking a political science class from Dr. Michelle Payne. She wrote what she considered an incredible paper, but found herself seeking answers when she didn't get the grade she thought she deserved.

When she asked Payne about her grade, she learned that the paper was well-written, but lacked the ‘meat’ Payne was looking for. Payne jokingly told her the paper was so beautifully written that perhaps she should reconsider her career options.

"It was just a joke on her behalf," said Murphy, "but it really stuck with me."

Turning an idea to reality

In the year between finishing her bachelor's degree and beginning work on her master's, Murphy decided to explore the possibility of becoming a novelist.

She wrote her first novel in just three weeks, but after rereading it a few times, realized she wasn't going to pursue publishing it. A few months later, she participated in National Novel Writing Month and had a much different outcome.

"I thought, 'If I can write a novel in three weeks, I can write one in a month.' I took time and polished it, and around February I decided to start querying agents and I found one."

The novel, Side Effects May Vary, is about a 16-year-old girl who sets out to right wrongs – however she sees fit – when she is diagnosed with leukemia. It is scheduled for release in March 2014.

Murphy also has another novel, "Dumplin'," in the works that is slated for publication in 2015. The story is about a girl from the South who decides to overthrow her mother’s beauty pageant.

Finding her way at Wesleyan

Murphy has what she describes as an "embarrassingly easy publication story," but she credits the people she met at Texas Wesleyan with helping her become the professional she is now.

"I wouldn't have become more disciplined without these people in my life – a lot of people who I found at Wesleyan – who opened doors for me at the right time and created a space for me where it was safe to explore my creativity and come into my own."