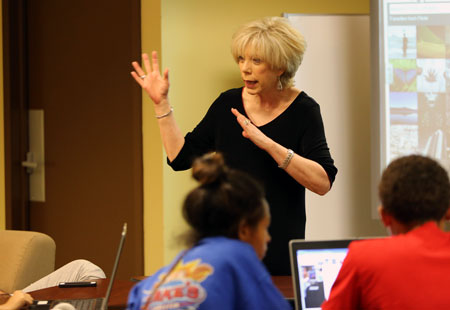 If you want to be a successful student, you should stay off of social media during the lecture, right? Not if you're taking a speech class from Dr. Carol Johnson-Gerendas.

Instead of having her students close their apps and open their notebooks, this semester she's using Twitter as a back-channel for communication in the classroom and encouraging students to tweet while they learn.

She's also teaching her students how to use the platform as a research tool and building a community within the classrom.

"They thought it was a really cool thing to do because many of them didn’t have an account yet," said Johnson-Gerendas, an assistant professor of communication. "This class was the first opportunity they took to get on Twitter, and as the semester goes on, I see them more and more engaged with it."

The majority of her students are freshmen, and she wants them to take what they’re learning about the language of certain media and be able to apply it to other courses as they continue their studies.

"There’s a whole language that goes with Tweeting that you have to begin to acquire so that you look either like a novice or a more experienced user," said Johnson-Gerendas. "Ideally, freshmen would come in and get some exposure in a low-stakes environment and be able to scaffold from that to the higher-stakes classes."

In addition to learning the platform, Johnson-Gerendas is also teaching her students how to think critically about the information they find on social media.

In addition to Twitter, Johnson-Gerendas is also incorporating Zeega this semester, which allows students to create and share interactive videos. Her unique use of the media has garnered the attention of the program's developers.

Prior to using Zeega in the classroom, one of her pieces was selected to be showcased at the San Francisco Museum of Modern Art as part of an exhibit titled "The Making Of…Live at SFMOMA."

Now that she's using it with her students, her reputation continues to grow.

"The community director sent me an email that said 'We're really interested in what your class is doing with Zeega. It looks a little more complicated than what we normally see classrooms doing and we're interested in the conversation your students are having on Twitter.'"