Capturing the Essence of Religious Ritual 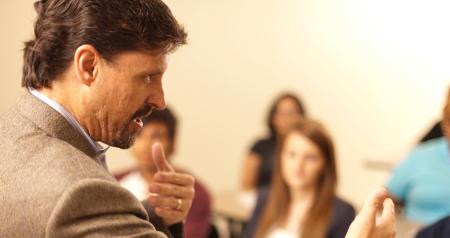 Mark Hanshaw, assistant professor of comparative religious studies, has just finished The Embrace of a Loving God: Encountering Sufism, the second part of his multi-part documentary series. The documentary was crewed by Texas Wesleyan students, and filmed on location in Konya, Turkey and India.

Q: How did making part two differ from part one?

A: We learned a lot from the first film, and as a result, I think we’ve developed a more refined product with this second film. In terms of content, this second film focuses upon an important mystical branch of the Muslim faith and, as such, it has a distinctly different flavor than the first film.  What is true of both films is that we tried to capture aspects of the lived personalities of the faiths encountered. It’s really amazing to have direct encounter with such an array of faiths – it adds another dimension to learning.

Q: The theme of the movies is religious ritual. Why does this topic interest you?

A: I’ve always been interested in religious rituals because they contribute so much to the broader tradition. In a sense, rituals are the face of religious systems because they are typically the most visible part of the tradition. They add color and drama.  Rituals also serve to provide the skeletal system of most religious systems. They provide us with a model of how we are to engage the faith – they give us structure.

Q: Why film a documentary?

A:  The practice of faith is a visually compelling act. It generates emotion. It is really difficult to capture such emotion in words. Film offers us the opportunity to invite students to have a more personal experience with other faiths.  This can be particularly helpful to students, as they explore religions that are largely unknown to them or may be broadly misunderstood.

Q: What’s it like to take students to these amazing locations?

A: Traditional world religion classes can be isolating – each religion has its own section and chapter, so it’s easy to see them all as being very distinct and separate. Yet, when you examine aspects of these traditions side-by-side through direct engagement, you begin to see both similarities and differences you might not infer from reading a textbook. To travel in India and Turkey with students was an unforgettable experience. Our small crew visited some amazing locations. At the time you are focusing on filming and getting interviews and making sure everything is in order, but the second you get back on the plane, you think, “wow, that was incredible.”