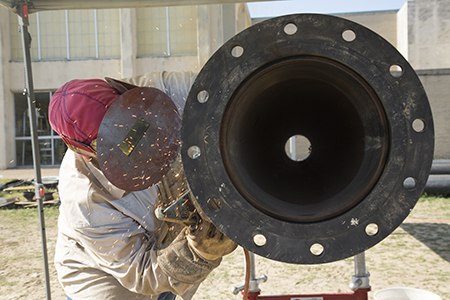 Texas Wesleyan has broken ground on major renovations to its Central Power Plant (CPP), a key part of the University's $6.2 million energy-saving project.

The power plant renovations are projected to save 5.9 million kilowatt hours per year and $377,000 annually on utility costs.

The highlight of the CPP project is a new Combined Heat and Power (CHP) system, or co-generation system. This system allows for Texas Wesleyan to generate its own energy.

"Texas Wesleyan is one of the first universities in North Texas to utilize this type of technology," Jeff Lovejoy, project manager for The Way Companies, said. "Co-generation systems are a growing trend — the energy and cost savings are good for the environment and make good business sense."

"We can now capture otherwise wasted heat from the engine and exhaust and turn it in to energy we can use," Brian Franks, executive director of facilities development and operations, said. "This energy creates what is essentially free heating and cooling for the campus."

The project with The Way Companies is self-funded and will save the University more than $12 million over the next 15 years. Total energy savings for the entire project is more than 7.2 million kilowatt hours per year, which is equivalent to saving 5,596 tons of carbon dioxide per year.

Total water savings, which also includes a new irrigation system and improving water usage efficiencies on campus, is projected to be 7.1 million gallons per year.

Part of the University’s 2020 Vision, the project is a major part of ongoing campus enhancements. 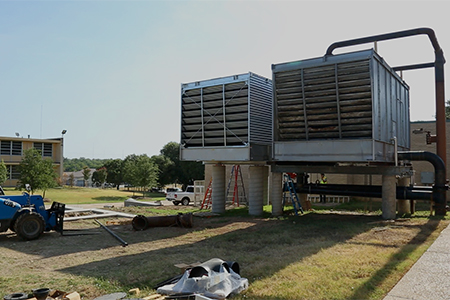 On the left is the new cooling tower, next to the existing cooling tower. Both towers will support the University's new energy-saving power plant.