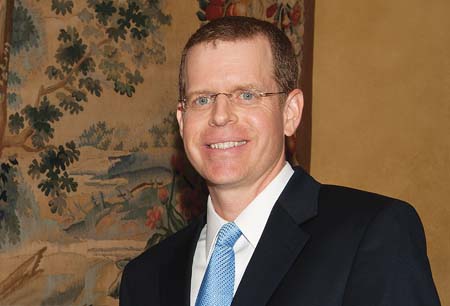 Aric Short, associate dean for academic affairs and professor of law, has been named interim dean of the law school.

“In making this appointment, I have been in close consultation with the provost and dean of faculties at Texas A&M University,” President Frederick G. Slabach said. “Aric received overwhelming support for this appointment from the law school faculty and was the consensus choice of both Texas A&M and Texas Wesleyan.”

In his 10 years at the law school, Short served most recently as associate dean for academic affairs, where he emphasized and expanded experiential learning and professionalism training. These efforts included developing a skills-based winter term, building new clinical partnerships with the Tarrant County District Attorney’s Office and the Federal Aviation Administration, and helping implement an oral skills graduation requirement. Dean Short has been instrumental in the law school’s transition to Texas A&M University, providing ongoing leadership for all matters related to the potential acquisition.

Prior to his administrative work, Short taught Property, Wills and Estates, and other property-related courses, and he was voted Professor of the Year six times. His research and scholarship have focused on housing-related discrimination and the litigation of human rights claims in U.S. courts. Dean Short has been active in local and national service, including serving on the ABA committee that recently revised distance learning standards for legal education. Before entering academia, Dean Short practiced law at Wilmer, Cutler & Pickering in Washington, D.C. and Vinson & Elkins in Austin, Texas.

Professor Maxine Harrington, a member of the faculty at Texas Wesleyan University School of Law since 2003, has been named associate dean for academic affairs. Prior to teaching, she had an accomplished career in both the public and private sectors. Upon graduation from law school, she served as law clerk to the Honorable George R. Gallagher of the District of Columbia Court of Appeals. Harrington was also in-house counsel for Saint Elizabeth’s Hospital, which was part of the National Institute of Mental Health and the only civilian federal psychiatric hospital. After relocating to Texas, she entered private practice and became a named shareholder of Broude, Nelson & Harrington, P.C., where she was lead defense counsel in medical malpractice cases.