More Students Are Moving in at Texas Wesleyan 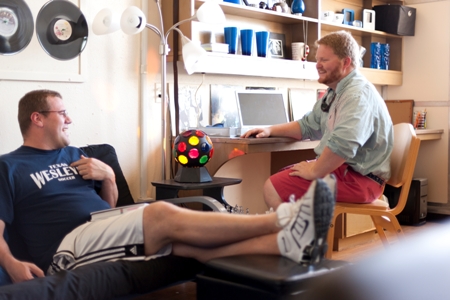 More students are enrolling at Texas Wesleyan, and many more of them are choosing to live on campus.

Along with positive news in enrollment, U.S. News & World Report also ranked Texas Wesleyan in the top-tier of regional universities for the third consecutive year.

“This reflects not only on our institution, but also on the faculty and staff who are at the heart of our university,” Texas Wesleyan University President Frederick G. Slabach said of the ranking. “U.S. News & World Report’s external validation reflects the quality of our programs and the commitment of those who implement them.”

What the Numbers Say

For starters, more students are living on campus.

Texas Wesleyan has plans to increase the number of students living on campus to more than 500 by 2020 to continue to develop a vibrant, on-campus student life. A growing on-campus student population allows more opportunities – like intramural leagues and service and honor societies – to thrive on campus.

“This freshman class is full of remarkable students,” Holly Kiser, director of admissions, said. “By building relationships and connecting with their professors, they have the opportunity to not only better their own lives through a college education, but also to use their critical thinking skills to better the world around them after they graduate.”

Students of the Online Age

The class of 2016 comes from local high schools like Aledo, Arlington Heights and Crowley, as well as from countries like Nepal, Bangladesh and South Africa. There are traditional freshmen, as well as non-traditional students.

An 18-year-old freshman student beginning his or her classes at Texas Wesleyan was born after the release of Microsoft Windows 3.1, the dissolution of Czechoslovakia and the inauguration of President Bill Clinton.

YouTube has existed since before they were teenagers, and they’ve probably never used a floppy disk or a cassette tape.

And, more than ever, the students of the Texas Wesleyan class of 2016 will need a graduate degree to move forward in their careers, a charge the university places as a top priority.