Rams advance to SAC championship game on May 8 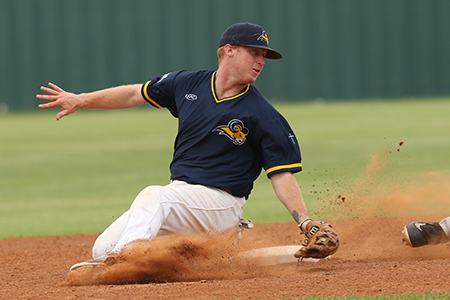 The 12th ranked Texas Wesleyan University baseball team (45-12) swept a pair of games at 19th ranked University of Science & Arts (41-15) in Sooner Athletic Conference Tournament action on Sunday. The Rams took game one 8-4 to force an if-necessary game which the Rams took by a final of 14-9.

With the wins, the Rams advance to play the nation’s top-ranked team, Oklahoma City University (44-8), in the SAC Championship Game on Monday.  That game is scheduled for a 1 p.m. start at USAO’s Bill Smith Ballpark in Chickasha, OK. The game can be viewed live here.

Playing in their fourth and fifth games in the last three days, six Ram pitchers came up with 18 innings of work on Sunday. Meanwhile, the Rams’ offense delivered 22 runs on 27 hits.

The format for the SAC Tournament this season features a pair of double-elimination brackets followed by a winner-take-all championship game. The Rams will now take on the nation’s top-ranked team with the SAC crown on the line on Monday. The Stars hosted the tournament’s other bracket and breezed through with three consecutive wins.