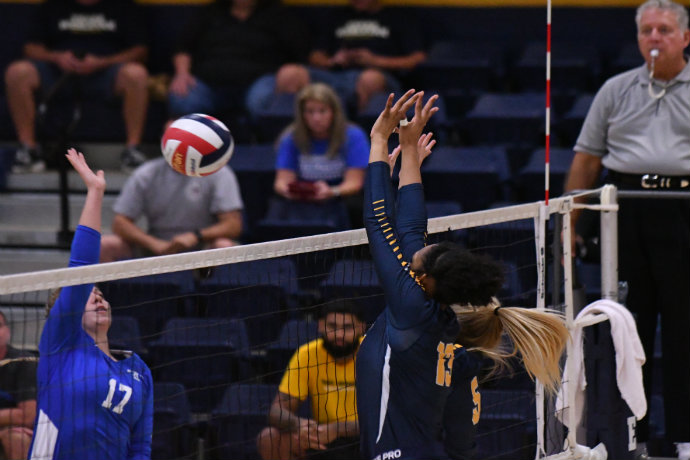 Texas Wesleyan got first-class performances from a number of players, and its balance and depth is what ultimately out-paced the Eagles, who were coming off a five-set loss to one of the top teams in the Sooner Athletic Conference - Oklahoma City - last week.

Speaking of Robinson, she got back on the court tonight after missing a couple of weeks with a minor injury. She got two kills in her limited return - we'll see more of the senior as the season progresses - needing just 230 more assists to reach 2,000 in her three seasons as a Ram.

Splitting passing duties with Pargas Friday night was Hannah Altman. She also had 31 assists, a new high as a Ram, to go with her 17 digs.

Brittni Mohle was the aggressor. Not only did she lead the team in kills (17) and attacks (58) but she also helped the Rams defense with 15 digs of her own. In the last two matches, Mohle has had 36 kills on 91 attacks, hitting .395. She was the catalyst in Set 4, the first time either Texas Wesleyan or Southwestern Christian were able to create any separation. Mohle was responsible for the first seven kills of the fourth frame, putting the Rams up 10-5.

Dana Lohrke hit an astounding .462 - 14 kills on just 26 attacks - and had 3.5 blocks to go with them, her second career game with a hitting percentage of over .450 (minimum 20 attacks). Her set to dominate was the third to stave off a sweep. Lohrke had three-straight kills starting when the Lady Rams led 20-19 after the Eagles led 18-17 - seven points away from ending the night. Lohrke's streak put Texas Wesleyan up 23-21 and then three different Eagle attacking errors helped send the Rams to a fourth set.
Freshman Jasmine Creek turned in career highs in both kills (15) and digs (20). She also had 1.5 blocks and one assist.

Brianna Sitton paced the 139-dig effort from the Rams with 33. It fell one short of her season-high 34 in a five-set loss to defending national champion Lindsey-Wilson on August 24.

RAMBLINGS:
The 139 digs against Southwestern Christian were the most digs in a match by Texas Wesleyan since 155 digs against Southwest (NM) on September 29, 2012 - nearly nine years ago. The last time four different players had 14 or more kills was in the same game: 33 for Lynsay Buell, 21 for Katie Rosenbusch, 14 for Meghan Finley and 14 for Alex Hendee.

Texas Wesleyan hosts Oklahoma City (8-2, 4-1), who is coming off a four-set loss to Southwest Assemblies of God Friday night in Waxahachie. The Rams and the Lions are now the only unbeatens in the SAC at 5-0. Wesleyan plays at the Stars tomorrow at 1 p.m.