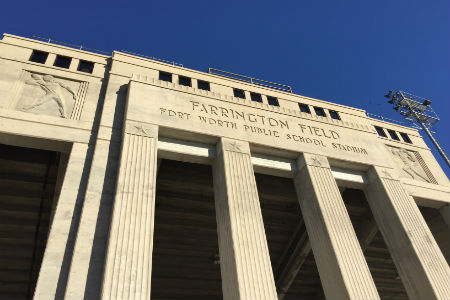 Texas Wesleyan University will kick off its highly-anticipated, revived football program at Fort Worth’s historic Farrington Field – the stadium where the Rams played their last home game in 1941.

Farrington Field is located at 1501 University Dr., in the heart of Fort Worth’s cultural district and within walking distance to the booming West 7th Street restaurants and retail.

“Saturday afternoons at a Texas Wesleyan football game will be about the fans and the love of the game,” Athletic Director Steve Trachier said. “Parking will be free and tickets are cheap. This is going to be good, old-fashioned, hard-nosed football – with a game day experience that families and all football fans will enjoy.”

“We will have tailgating at the stadium, and our proximity to W. 7th Street will give our fans even more options before and after the game to dine and socialize,” Trachier said.

Texas Wesleyan’s last home football game was played on Saturday, Nov. 15, 1941 at Farrington Field against the Trinity University Tigers. It was the final Texas Conference game of the season and homecoming for the Rams. Texas Wesleyan won the game, 39 – 0. At the time, Farrington was a just a two-year-old stadium, having been constructed in 1938-39 by the Works Projects Administration as part of Franklin D. Roosevelt’s New Deal. The stadium seats 18,500.

“Our first home game of the season will be a tribute to the 1941 team and first responders,” Head Coach Joe Prud’homme said. “The men who last played for Texas Wesleyan were men of honor and it is our privilege to carry on their tradition.”

In 1942, football went on hiatus at Texas Wesleyan when many players went on to serve in World War II. Intramural football returned after the war.

The Rams will first take the field at Farrington at 3 p.m. on Saturday, April 22 for their spring “Blue & Gold” scrimmage game. Admission is FREE.

The first home game of the Rams 2017 season will kick off at 2 p.m. on Saturday, Sept. 9 when they host Millsaps College from Mississippi.

Get your blue & gold on

Texas Wesleyan Rams apparel is available through the University bookstore online or in their location across from the University clock tower at 3308 E. Rosedale Street.