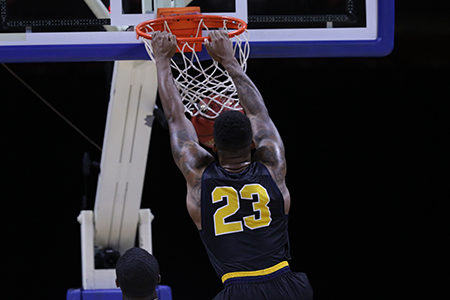 The 20th ranked Texas Wesleyan University Men's Basketball team (18-8, 11-5 SAC) took a thrilling 76-74 victory over Southwestern Assemblies of God University (18-8, 10-6 SAC) on the strength of a buzzer-beating three from Branden Jenkins in front of a raucous crowd at the Sid Richardson Center Feb. 12.

SAGU held a three-point lead entering the final minute, but Curtiss Anderson came up with a huge block. Ryan Harris then fed Anderson the ball for a dunk to get the Rams within a point at 74-73. The Rams forced a SAGU miss with nine seconds to play, and Juwan Jones raced up the floor. Jones drove the lane then flipped the ball out to Jenkins for a corner three as time expired causing The Sid to erupt.

Jenkins, the SAC's leading scorer, and Anderson each posted a double-double. Jenkins finished with 24 points and 10 rebounds, while Anderson went for 20 points and 15 boards. Jones added 11 points off the TXWES bench.

The win lifts the Rams into a tie for the SAC lead at 11-5 in conference play with Oklahoma City University.

The Texas Wesleyan Men's Basketball team jumped up to No. 20 in the latest edition of the NAIA Division I Coaches' Poll released on Tuesday.

Texas Wesleyan climbed back into the top-25 in the last edition of the bi-weekly poll. This week they rose four spots to No. 20 as they improved their record to 18-8 overall and claimed a share of the lead in the Sooner Athletic Conference (SAC) with a league record of 11-5.

Since the previous rating the Rams have gone 4-1. After suffering a 79-78 loss at Southwestern Christian, they responded with a thrilling win over SAGU Monday night. A buzzer-beating three from Branden Jenkins sealed that victory and moved the Rams into a tie for first in the conference standings with Oklahoma City who plays at Central Christian on Tuesday.