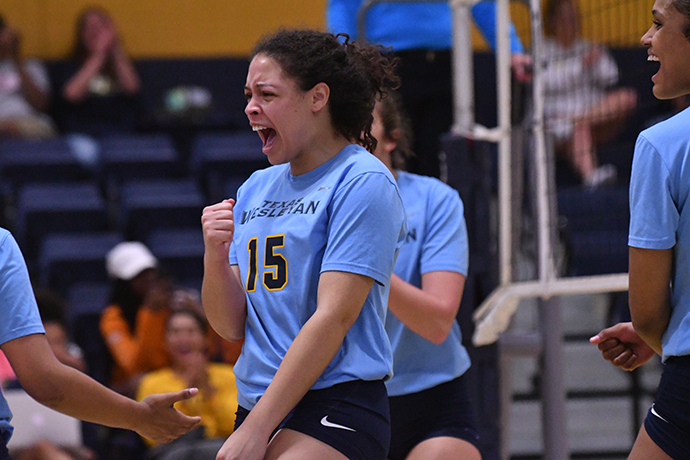 Texas Wesleyan Volleyball (23-9) erased a 2-1 deficit to the Wayland Baptist Pioneers (11-18) to advance to the Sooner Athletic Conference Semifinals Tuesday night at the Sid Richardson Center (25-18, 23-25, 23-25, 25-16, 15-9) improving to 4-1 in five-set matches this season. The victory sends Texas Wesleyan to the SAC Semifinals against the No. 2-seeded Southwest Assemblies of God Lady Lions.

A tournament berth is on the line for the winner, to join Oklahoma City, the conference's regular-season champion. The Lady Rams couldn't have gotten the chance without the brilliant performances from Sasha Robinson and Brenda Pargas.

Sasha Robinson turned in 22 kills - seven over her previous career high, on just 37 attacks - a hitting percentage of .541. She added 20 assists, her first career 20/20 double-double with kills and assists involved. As if that wasn't enough, Robinson turned in a team-high 18 digs. The performance elevated past the one she turned in earlier in the season against Oklahoma City - 12 kills, 20 assists, 25 digs.

Brenda Pargas was just as essential. She had 23 assists and 17 digs, but also had two kills on just three attacks. Robinson and Pargas - two traditional passers in the Rams offense - helped stabilize an unusually off-night for Texas Wesleyan attackers. In fact, the unlucky bounces, player run-ins and miscommunications was downright extraterrestrial in its frequency. No matter, the Lady Rams weathered the storm.

Down two games to one, up just a point in Set 4, 17-16, Robinson took over, accounting for three of the eight points in an 8-0 run to close out the set. Four of the points came off of Pioneer errors as Wayland Baptist seemed to catch the bug the Lady Rams were dealing with earlier in the night, despite a career-high 20 kills from Wayland Baptist's Mallorie Ellis, who snapped her previous career high of 19 kills (coincidentally on the Sid Richardson Center floor September 9, 2016).

The fifth set started with a Chastiny Brown kill and back-to-back service aces from Robinson - she had three of those Tuesday too. Three more attacking errors for the Pioneers in Set 5 helped dig a deeper hole, while Robinson put them away on the game's final point. Jasmine Creek came alive with four of her eight kills in the final stanza, matching Hannah Altman's eight kills - another career high for successful strikes for a traditional passer. Brianna Sitton had 17 digs; Ashley Curry pitched in 11.

Dating back to last season, Texas Wesleyan has now won seven of its last eight matches that have been taken to a fifth set. The last time Texas Wesleyan lost a five-set match in conference? The 2016 Sooner Athletic Conference Tournament Semifinal against? Wayland Baptist.

No. 1 Oklahoma City, No. 2 SAGU, No. 3 Texas Wesleyan and No. 5 Southwestern Christian remain in the SAC Tournament. The semifinal round is Friday afternoon (OCU/SCU at 4:30, TXWES and SAGU at 7 p.m.) with the final set for Saturday.