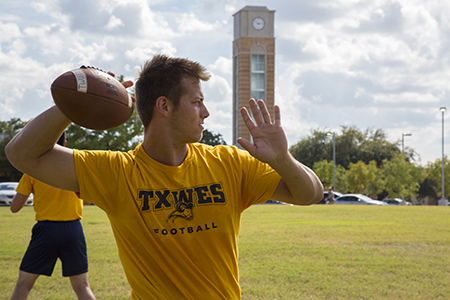 After a 75-year timeout, the Rams are returning to the gridiron. Texas Wesleyan University announced its 2017 football schedule:

Check out the new hype commercial titled, "This is our year." The commercial reveals the team's official uniforms and features several Texas Wesleyan football players.

Get your gear now

Texas Wesleyan Rams apparel is available through the University bookstore online or in their location across from the University clock tower at 3308 E. Rosedale Street.

“Our football apparel is already flying off the shelves,” store manager Danielle Smith, said. “If something is out of stock, don’t worry, more is on the way!”

The University is in the process of finalizing an agreement with a local facility for practice and games.

“We’ve had a lot of great options, especially in this area, and hope to announce the location for next year’s home games soon,” Athletic Director Steve Trachier, said. “We’re continuing to explore the possibility of building a stadium on campus through collaborative partnerships. Right now, we’re focused on building our new team that is 116 players strong and recruiting for the future.”

Trachier also said that the University hopes to have ticket information for home games available next spring.

“We are going to create a great game-day experience that is fun – and affordable – for the entire family,” Trachier said. “Football games are about community, spirit, family and friends. Our ticket prices will reflect that.”

The Rams will compete in the Central States Football League (CSFL), a conference that features teams from four NAIA conferences spanning, Texas, Oklahoma, Arkansas and Arizona.

The season will close against rival Southwestern Assemblies of God University (SAGU) from nearby Waxahachie, Texas. Texas Wesleyan and SAGU are linked by a 30-mile stretch of Highway 287 and have a long history of athletic competition. Both institutions formerly competed in the Red River Athletic Conference and both made the move to the Sooner Athletic Conference in 2013.