Commencement 2018: A senior's farewell to TXWES 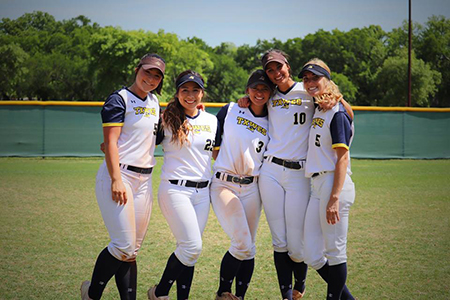 Four years and hundreds of cups of coffee at TXWES later, graduation is officially in sight. Before your time at TXWES passes you by, I encourage you to take a second and chat with some people behind the scenes of TXWES who truly make it feel like a home away from home. Posted above is a picture of me with my softball teammates. From left to right, Sam Bastien, Corrina Palomino, Demi Dotson, myself and Lauren Wernet.

Ana is the weekday host at Dora’s. Every Monday morning, she asks how the weekend was. When breakfast is finished, she asks if I will be back for lunch. She has even taught a few of the students some Spanish greetings. She is accompanied by a diverse, friendly team throughout the cafe. If you haven’t gotten to know them personally, you better hurry before your graduation sneaks up on you.

I am dreading the day I hear his famous greeting for the last time, “What’s up, KP?” Doug doesn’t have a bad mood and in four years I don’t think I’ve ever caught him on a bad day. I go check my mailbox even when I know there is nothing waiting on me just to have a reason to hang out with him.

You’ve seen Heath multiple times but have you ever stopped and chatted with him? Heath is the game administrator. He attends every single game, and sits in the stands to observe and make sure fans enjoy the game peacefully despite the heated disputes on the field. And if he really likes you, he’ll share his chocolate covered almonds.

Eddie works for the maintenance department. If you’re not 100 percent sure which one he is, just look for the guy that is always wearing a Ram sports hat. Eddie works during the day and as soon as he is off, you can find him sitting in the stands at our games right by Heath.

Wow, where do I even start with the athletic department? Josh Lacy and Ryan Keating both put in countless hours attending games, and that's not even counting the hours they put in for the website and stories. Both of my coaches, Coach Gower and Esparza, have gone absolutely above and beyond the last four years to ensure we have received enough preparation to succeed not only on the field, but also in the classroom and in life. Coach Nat, the cross country and track coach, has been one of the most supportive people of our team on campus.

During the fall and winter breaks, when we need help passing our distance conditioning tests, he has sacrificed his morning practice to have his girls pace us. He is always the loudest one in the stands when he is able to make it to our games (which is practically all of them). Josh Gibbs, the women’s soccer coach, is another one of those stand out coaches. Every time I see him, it’s easy to stop and have a 30-minute conversation about our seasons or his little family you can find at his games. If you didn’t know any better, you would think these coaches had 400 athletes on campus because they treat every single one as their own.

If you’ve been in Dora’s around lunch time then you have seen Mr. Brown. He doesn’t work at TXWES, but he does enjoy lunch at Dora’s and visiting with faculty or checking his email in the library. He always sits at the long table to the left of the home cooking line. Sometimes he’s with someone and sometimes he isn’t. Either way, I have never seen him turn down good company.

If you didn’t know her as a student, you have certainly been missing out. She is the Executive Assistant to the Vice President-Enrollment, Marketing & Communications. She is always there to listen about good and bad news, and she has a killer snack drawer.

These are just a few of the people at Texas Wesleyan who go above and beyond for every single student they come across. Whether it is cracking a smile on the most stressful days, giving advice, or just a few words of encouragement, faculty and staff are what truly make TXWES smaller and smarter.

We want to hear your #TXWES memories. Share them on social media using the hashtag #TXWES.