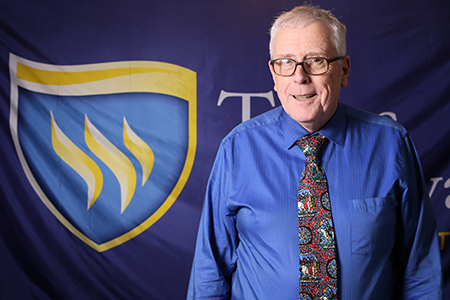 Bruce McDonald Ph.D., a professor of religion, has published an article focused on the role of Martin Luther in the initiation of the Protestant Reformation, in the October edition of the publication, High Calling, produced by the Francis Asbury Society. His article, entitled, “God’s Trumpet,” focuses on both the issues that motivated Luther and the relevance of these concerns in the modern era.

In the article, McDonald speculates upon how Luther might interpret and critique modern Christianity, was he alive, today. Indeed, after reminding readers of the central theological shifts that Luther provoked, McDonald asks the useful question of how Luther’s famed “95 Theses” might be framed, if they were to be written in a contemporary context.

“As we reflect upon the legacy of Luther, 500 years after he posted his 95 Theses, Professor McDonald has done a grand job of helping us to think of this seminal Christian thinker not just as a figure of history, but also as one who continues to challenge our ideas,” said Mark Hanshaw, Dean of the School of Arts & Letters. “This is a perfect time to reflect upon the impact of the Protestant Reformation and Luther, in light of ways in which the Church has evolved.”

The posting of Martin Luther’s 95 Theses took place on Oct. 31, 1517, in Wittenberg, Germany, and is considered by many to be the beginning of the Protestant Reformation. Professor McDonald teaches courses in the areas of Religion, Philosophy and Humanities. He also recently published a new text focused upon Western religions.