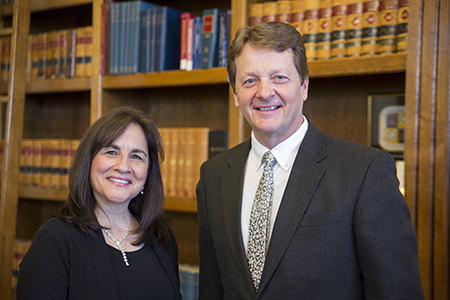 Marjorie Herrera Lewis' lifelong passion for sports and writing led her to the Fort Worth news giant at the age of 27, where she was soon named a beat writer for the Dallas Cowboys. During her career with the Star-Telegram and The Dallas Morning News, Lewis covered the Dallas Cowboys, Texas Rangers, Dallas Mavericks, Wimbledon, the Davis Cup and many other professional sports teams and events.

"When I ask myself, 'How did this happen?'," said Lewis, "my answer is always, the Fort Worth Star-Telegram."

Lewis also covered the Texas Wesleyan men’s basketball team during her time with the Star-Telegram and fondly remembers the hospitality she experienced on the East Fort Worth historic campus. With this endowment, Lewis ensures students at Texas Wesleyan will have a variety of opportunities to enhance their education in mass communications.

"My hope is that this speakers series will energize students who want to study and learn about the field."

The Marjorie Herrera Lewis Endowed Speaker Series takes place every spring. Check back for more details about the upcoming speakers.

Dallas Cowboys Sideline Reporter Kristi Scales
Kristi Scales began her broadcasting career at KVIL Radio Dallas in 1989 and has now completed her 19th season as Sideline Reporter for the Dallas Cowboys. Kristi has spent 27 seasons as a member of the Dallas Cowboys Radio Network. In 2002, she became the first female to fill the role of booth analyst for an NFL radio broadcast. Kristi has also produced three Super Bowl broadcasts, as well as American Bowl broadcasts from London, Toronto, Mexico City and Monterrey. In recognition of her work, Kristi is a three-time winner of the Press Club of Dallas Katie Award.
During game day broadcasts, Kristi brings listeners exclusive up-to-the-second information from the Cowboys sideline. In addition, Kristi serves as television co-host of the “Dallas Cowboys Postgame Show” and is the host of the live “Owner’s Box” interview with Jerry Jones on the Cowboys Radio Network. Kristi writes for numerous websites, magazines and on-line reports, including DallasCowboys.com and 5PointsBlue.com, a website founded by women working within the Dallas Cowboys organization.
Former NFL Player & now NFL Commentator Darryl Johnston

Daryl Johnston, nicknamed “Moose” by a teammate who said he was a moose walking amongst a field of deer compared to the other running backs on the team, began his broadcasting career in 2000 during FOX's coverage of the 2000 NFL Europe League. He is now a member of the NFL on FOX broadcast team with Kenny Albert.

His other broadcasting credits have included NFL Network, co-hosting Inside the Huddle with Craig James on KDFW-TV, The Daryl Johnston Show on KXAS-TV, as well as The Moose Call, a weekly radio show on KRLD/KLIF in Dallas.

Johnston has contributed time to many charities including the Special Olympics, Children's Cancer Fund, Cystic Fibrosis and Literacy Instruction for Texas (LIFT). Additionally, Johnston is the chairman of “Slant 45”, one of the largest community-wide service-learning programs for children in U.S. history and the largest in NFL history. Along with his contributions to charity, Johnston is also a principal at G9 Turf.

Working in the executive office since 1989, Anderson’s experience has propelled her forward as one of the most innovative and versatile executives among women in professional sports and executives as a whole.

Anderson’s vision and direction leads the Cowboys in brand marketing, fan engagement, stadium design, entertainment, licensed apparel, cause marketing and community relations. Anderson played an instrumental role in the design and development of The Star in Frisco - the Dallas Cowboys World Headquarters, training facility and event center located in Frisco, Texas which opened in the summer of 2016. The 91-acre mixed-use development serves as the team’s headquarters and a destination for shopping, dining, nightlife, athletic fitness, events, hotel and residential.

She played a prominent role in shaping the design, décor, sponsor integration and overall presentation of AT&T Stadium, the renowned state-of-the-art venue that opened in Arlington, Texas in 2009. Under Anderson’s guidance, the venue has played host to some of the highest profile sports and entertainment events in the world – among those are Super Bowl XLV, the 2010 NBA All-Star Game, the 2014 NCAA Men’s Final Four, the annual Cotton Bowl Classic and the first-ever College Football Championship game in 2015. We also hosted the Academy of Country Music Awards, breaking ratings and attendance records, and WrestleMania 32 which broke WWE’s all-time attendance record.

In the philanthropy space, Anderson served as the first female chairman of The Salvation Army’s National Advisory Board from 2010-2014 and was the first woman to serve in that role. In 1997 she introduced a groundbreaking approach to fundraising on the worldwide stage by harnessing a Thanksgiving Day national television audience during the Cowboys halftime as the kick off to The Salvation Army’s National Red Kettle Campaign. Anderson set the wheels in motion, helping the Army raise over two billion dollars and touch lives across the globe by combining the Dallas Cowboys and popular musical entertainers featured on network television during one of the most watched NFL games. Since that initial halftime presentation which featured the musical talents of Reba McEntire. Other major entertainers performing at the Thanksgiving halftime show included Randy Travis, Clint Black, Toby Keith, Destiny’s Child, Sheryl Crow, Carrie Underwood, Kelly Clarkson, the Jonas Brothers, Keith Urban, Enrique Iglesias with Pitbull, Kenny Chesney, Selena Gomez, Pitbull with Ne-Yo, Luke Bryan, Eric Church, Thomas Rhett and Meghan Trainor.

Enjoy this short video about the Marjorie Herrera Lewis Speaker Series. The speaker series has been enriching to Texas Wesleyan University and to mass communication students. It has provided great opportunities for networking.

Log In Help Desk
School of Arts and Sciences