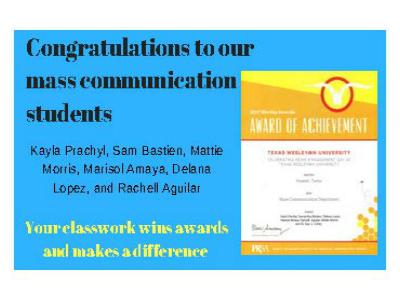 The team, which consisted of Sam Bastien, Kayla Prachyl, Delana Lopez, Mattie Morris, Marisol Amaya, and Rachel Aguilar, won the award for a campaign they created in MCO 3351 Survey of Public Relations.

Prachyl, a senior mass communication major, is glad the team’s hard work paid off with an award.

“Winning this award on first thought was being able to use it as a resume builder,” Prachyl said. “It is nice to know that the ‘real life’ work we put into school is being noticed by professionals.”

Sam Bastien, a senior mass communication major, was shocked that the team won the award not because they didn’t deserve it but because it was the first time she had created a communications campaign.

“We were lucky we had Dr. Kay Colley to help us throughout the process,” Bastien said. “We honestly wouldn’t have been able to do it without her.”

The Mass Communication Department prides itself on creating learning opportunities in the classroom that lead to student success. This is the third time a classroom project has been awarded an award in the Worthy competition from Greater Fort Worth PRSA.