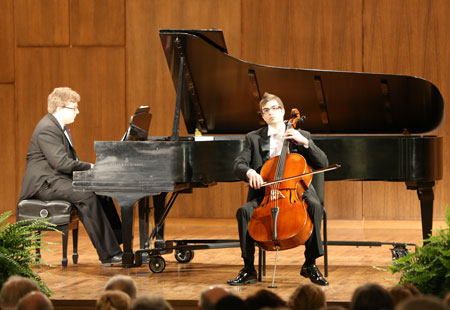 Texas Wesleyan University’s highest-achieving music students will share their vocal and instrumental talents during the President’s Honors Concert at 7:30 p.m. on Friday, April 4 in Martin Hall.

The event, originally scheduled for Feb. 7, had been postponed because of winter weather.

This year's array of performers includes three sopranos, four mezzo-sopranos, one tenor, one baritone, one trumpet, one tenor saxophonist, one flute player and one cellist. All were selected by a three-person independent panel of judges engaged for the occasion. Each student selected to appear competed against some 22 other music students during the audition process.

The event is hosted by President Frederick G. Slabach and Mrs. Melany Neilson, along with co-hosts Kenneth and Ann Jones. Mr. Jones is chairman of the Wesleyan Board of Trustees. Master of ceremonies for the evening will be Mr. Quentin McGown.

The President's Honors Concert, established in 1996, is now in its 18th iteration. The event has migrated from its original venue in the Texas Boys Choir building, to the Scott Theatre in the old Modern Art Museum, to its current home in Martin Hall, where it has been since 2003.

Admission is free and open to the public. Business attire preferred.

For more information about Wesleyan Music, visit our webpage.