A force to be reckoned with: Meet the new Thomas H. Law Scholarship recipient 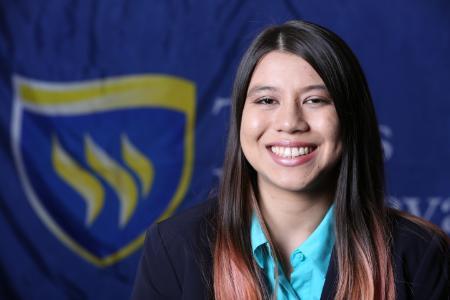 Kimberly Shamshoian-Sakamoto's focus on and commitment to excellence is both in and out of the classroom.

She will graduate from Texas Wesleyan University in May 2015 with academic honors, is a black belt in Hanbo and Ju-jitsu and will achieve a black belt in Judo next summer. Shamshoian-Sakamoto is also vice-president of Texas Wesleyan's business honor society, Delta Mu Delta, and is a member of Alpha Chi National College Honor Society.

She says she's still deciding exactly what she wants to do immediately after graduation, but has hopes of someday owning her own business.

One thing we do know - once Shamshoian-Sakamoto finds her post-graduation path, she will bring to it the same determination and passion she has for her business studies and the martial arts.

After all, who can stand in the way of a Judo master?

The path to a black belt trifecta

Shamshoiam-Sakamoto began studying Hanbo and Ju-jitsu when she was 14 years old.

"Some of my friends were doing it and I thought it looked fun," Shamshoian-Sakamoto said.

Talk about positive peer pressure. After one year of Hanbo and Ju-jitsu, she began transitioning to Judo. At age 15, she was competing at the national level. For three years in a row, Shamshoian-Sakamoto competed in the U.S. Junior Olympics and U.S. Junior Open Judo Competition in Florida.

While she has taken a break from competition during her college years to remain focused on classes, she regularly practices all three traditions and is just one level away from achieving her black belt in Judo.

Shifting her skills to the classroom

As for her business studies, Shamshoian-Sakamoto says that the martial arts have helped her succeed in school in several ways.

"They (the martial arts) have taught me discipline, responsibility and focus," Shamshoian-Sakamoto said. "These skills are essential to excelling in the academic environment."

"Kimberly is very dedicated and extremely bright," Hector Quintanilla, dean of the school of business, said. "In her studies at Texas Wesleyan, we've really seen her critical thinking skills grow and develop; there is not doubt she is committed to accomplishing her goals and self-disciplined."

It's clear that the skills Shamshoian-Sakamoto is developing in and out of the classroom are life-long skills that will help her succeed in whatever her next challenge will be.

With her degree and drive, who can stop her?

Kimberly Shamshoian-Sakamoto is the 2014 recipient of the Thomas H. Law Scholarship, which is funded by proceeds of the annual Business Hall of Fame event.

The Business Hall of Fame is a partnership between Texas Wesleyan University, the Fort Worth Business Press and the Fort Worth Chamber of Commerce. The event recognizes a Business Executive of the Year, an individual who has made a profound impact on the business world and promotes business as a challenging and dynamic profession.