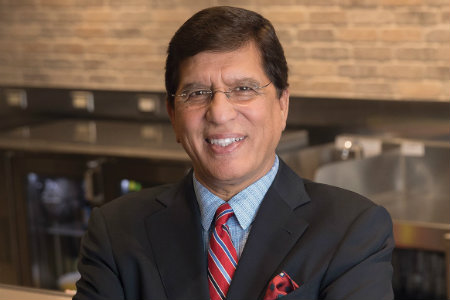 Mr. Aslam Khan, Chief Executive Officer of TGI Friday's, will be the keynote speaker for the University's spring commencement ceremony at 10 a.m., Saturday, May 19, in the MacGorman Chapel at Southwestern Baptist Theological Seminary in Fort Worth.

As Chief Executive Officer of TGI Fridays, Mr. Kahn brings an exceptional record of building restaurant businesses and leading highly effective teams.  For the past 18 years, he has served as Chairman of Falcon Holdings – a multi-brand franchisee of more than 500 restaurants in the Church's Chicken, Hardees, Carl’s Jr., and Long John Silver’s systems – and as an operator of 45 Piccadilly units. In 1999, he partnered with Sentinel Capital Partners, Fridays’ majority shareholder, in establishing Falcon Holdings to purchase 97 Church's Chicken restaurants. Since then, under Aslam’s leadership, Falcon has grown more than fivefold.

In 2011, Aslam received the IFA’s Ronald E. Harrison award for his commitment to diversity in his operations and he was named IFA Entrepreneur of the Year in 2014.