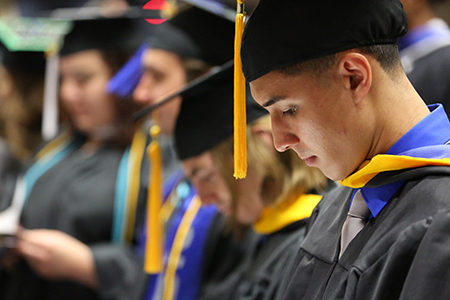 Dana Schultes '98 will be the keynote speaker for Texas Wesleyan University’s spring commencement ceremony at 10 a.m., Saturday, May 14 in the MacGorman Chapel at Southwestern Baptist Theological Seminary in Fort Worth.

Schultes has built a career as a stage and commercial actress as well as an arts administrator for the Stage West, one of this region’s most prominent and respected professional live theatres.  Recently named Stage West’s Executive Producer, she is credited with the creation of numerous programs for the organization and has been at the forefront of the theatre’s tremendous success over the last decade.

Recently named a 2016 class member of the Fort Worth Business Press' 40 Under 40, Schultes leads her life with a commitment to family, community and a belief in fearlessness.

Posthumous honorary Doctor of Law degree will be awarded to Dan Boulware at the ceremony.

For the past twenty years, and until his death on March 17, 2016, Dan Boulware served as a member of the board of trustees for Texas Wesleyan University, most recently as the Vice Chairman of the Board.  Additionally, Dan served as Secretary of the Board for many years, while also chairing the Advancement Committee of the Board and serving on the Finance and Audit committee.