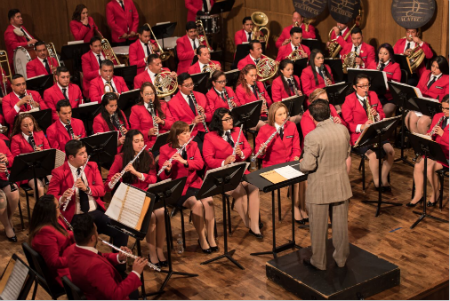 The concert was sponsored by the Texas Wesleyan Department of Music and Federacion de Clubes Zacatecanos of Fort Worth.

Directed by Salvador García y Ortega, the Sinfónica was accompanied by the soprano Sheila López. Vocalist Sheila López, native of Zacatecas, presented a variety of musical genres from Baroque to contemporary music to more than 480 fans.

The Symphonic Band of Zacatecas is one of the most popular musical groups of its kind in the country. Not only has it been successful at the national level, but its prestige has been recognized internationally.The group has recorded 22 albums and has his own School of Music, which has become a great breeding ground for musicians that now integrate important bands and symphony orchestras from the country and abroad.

Opening for the Sinfónica, was the “Espuelas de Plata” Maricahi from Fort Worth’s North Side High School.The high school Mariachi group, under the direction of Corina Cantu and Ramon Niño has blazed a trail of success in mariachi music. Last school year, the group was awarded a First Division rating from each of the judges in the state UIL competition. This achievement was followed by being named Grand Champion at the Jose Hernandez Mariachi Nationals in Los Angeles. The group has been creating an impressive reputation throughout the country, including performing at the world-renowned Carnegie Hall in 2014. The group has also performed at the 2016 Mariachi Vargas Extravaganza in Mexico City.

This was the third year that the Sinfónica has presented at Texas Wesleyan Martin Hall. Following the performance, the Sinfónica participated in the Fort Worth Stock Show and Rodeo parade on Saturday, Jan. 13, where it won best of show for marching bands. The Sinfónica also performed at the Saturday evening Gaga and on Sunday at the Best of Mexico Rodeo.