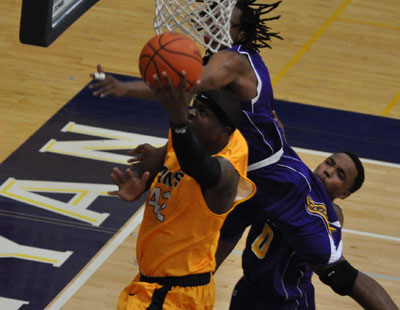 Texas Wesleyan basketball is off to a winning start after the men's team routed their first two opponents at home and the women's squad edged No. 8 Oklahoma Wesleyan on the road.

Led by Deonte Jones' 31 points and 11 rebounds,  the Rams (2-0) opened the season Saturday with a 97-88 win over Southwestern Adventist at the Sid Richardson Center. The Rams led by as many as 24 points in the first half and were up 45-26 at the break before holding off a second-half charge by JaColby Hardin-Crawford and the Knights.

Hardin-Crawford drained six 3-pointers and scored 26 points in the second half to help the Knights cut the lead to five points, but the Rams pulled away down the stretch to hang on for the win.

The Rams took the court at home again Monday and came away with a convincing 108-76 win over Texas College.

After trailing by 10 early, the Rams stormed back to tie the game and went on an 11-2 run to take the lead for good. Five Wesleyan players finished with double digits in points, including Rilware Bakare, who led the team with 21.

The men take the court again at 7:30 p.m. Wednesday when they host No. 24 Our Lady of the Lake University at the Sid Richardson Center.

The Lady Rams knocked off eighth-ranked OWU 82-77 in Bartlesville, Okla., on Saturday to start the season 1-0.

Takoia Larry lead the team with 21 points and eight rebounds and was one of five Lady Rams to reach double figures in scoring.

The Eagles led by as many as seven in the first half, but the Lady Rams scored 12 unanswered points to take a five-point lead and held a 41-38 advantage at the half.

After a quick second-half start by OWU to regain the lead, the Lady Rams used a three-point play and a 14-2 run to pull back ahead. They held off one more late charge by the Eagles to secure the win.

"The team showed their maturity and poise at the end of the game to outscore a quality opponent down the stretch," commented head coach Bill Franey. "This was a true team effort on both ends of the floor."

The Lady Rams return to action Wednesday at 5:30 p.m. when they host Our Lady of the Lake University at the Sid Richardson Center.