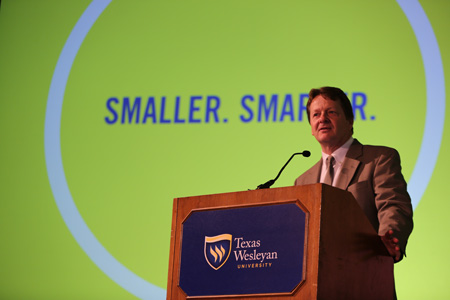 Join President Frederick G. Slabach as he kicks off this year's "Smaller. Smarter." advertising campaign with a special sneak preview screening and free T-shirt giveaway at 12:15 p.m. on Wednesday, Sept. 16, in Martin Hall.

"This year, our market testing shows we’re releasing the funniest, most relevant TV advertising we’ve ever put in the marketplace," John Veilleux, vice president of marketing & communications, said. "This is going to be a very positive year for Texas Wesleyan."