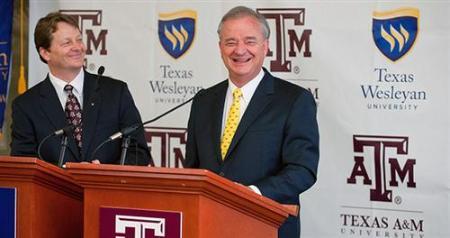 “Last October, Texas A&M System Chancellor John Sharp approached me about a unique strategic partnership,” Texas Wesleyan President Frederick G. Slabach said. “After months of careful consideration, we both consider this to be a mutually beneficial collaboration with limitless possibilities.”

Among the future offerings would be a joint law school JD/Texas Wesleyan MBA program and also a Texas Wesleyan undergraduate/law school 3+3 program. These new programs exemplify how the partnership would allow for the development of collaborative academic programming that will have a lasting impact on students. The Texas A&M University System Board of Regents is expected to meet later this week to take up pending business, including whether to provide approval for the Texas A&M-Texas Wesleyan University partnership.

“In creating the Texas A&M University School of Law at Texas Wesleyan University, we are finally expanding the Texas A&M brand into the field of law with a focus on emerging fields that require a growing legal expertise,” Chancellor Sharp said.

Sharp also put the law school partnership in the context of recent major announcements, saying, “In the last week, we have received one of the largest federal grants since NASA was brought to Texas to develop lifesavings vaccines and medical therapies, we announced a concession agreement for facilities and food services valued and more than a quarter billion dollars, and today we are forging a new partnership to create a long-sought Texas A&M School of Law, which will have a profound an impact on the future of Texas.”

Texas A&M University President R. Bowen Loftin praised the new arrangement, saying, “Expanding Texas A&M’s graduate professional programs is one of the key tenets of Vision 2020, our long-range plan to become one of the country’s top 10 public institutions by the year 2020. If you look at the top universities – our peer institutions – most of them have a law school.

“We see today’s announcement as the next step in Texas A&M’s dramatic evolution from its beginnings as a regional, military-focused institution into one of the nation’s largest and most prestigious comprehensive universities in a short period of four decades.”

“The synergy of this strategic partnership is extraordinary,” said Kenneth H. Jones, Jr., chairman of Texas Wesleyan’s Board of Trustees. “Texas A&M stands to benefit from an already established, ABA-accredited law school. Fort Worth and the metroplex would lay claim to an institution poised for first-tier status. And Texas Wesleyan would gain new academic programs that drive our vision of preparing motivated students for graduate school.”

Among the future offerings would be a joint law school JD/Texas Wesleyan MBA program and also a Texas Wesleyan undergraduate/law school 3+3 program. These new programs exemplify how the partnership would allow for the development of collaborative academic programming that will have a lasting impact on students.

The presidents of the two universities would appoint a Strategic Partnership Academic Coordinating Council to advise them on additional collaborative academic initiatives that would serve the students of each campus.

President Frederick G. Slabach served as dean at the School of Law from 2003 to 2006 and has remained a professor of law from 2006 to present. John Sharp was appointed chancellor of the Texas A&M University System by the Board of Regents on Sept. 6, 2011.

The agreement will be executed on or before June 1, 2013.

With a rich 122-year tradition, Texas Wesleyan University offers a solid undergraduate curriculum as well as master’s level and doctoral programs. U. S. News & World Report ranked Texas Wesleyan in the #1 tier of regional universities for 2011 and 2012. Texas Wesleyan is home to the nation’s largest nurse anesthesia program.

About Texas Wesleyan School of Law

About the A&M System
The A&M System is one of the largest systems of higher education in the nation, with a budget of $3.3 billion. Through a statewide network of 11 universities, seven state agencies and a comprehensive health science center, the A&M System educates more than 120,000 students and makes more than 22 million additional educational contacts through service and outreach programs each year. Externally funded research expenditures exceed $780 million and help drive the state’s economy.