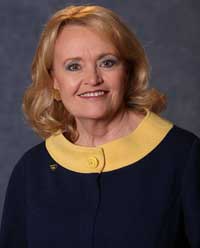 Powell has served for 14 years on the Texas Wesleyan University Board of Trustees and has chaired the Academic Affairs, Personnel and Buildings and Grounds committees. She previously served as Vice Chairman of the Board. Powell replaces outgoing Chairman Kenneth Jones.

“Beverly has been a key member of the Texas Wesleyan Board of Trustees,” President Frederick G. Slabach said. “As a business and education leader, and a Texas Wesleyan graduate, she has a keen understanding of the University’s future and its strategic vision, and her expertise will be very important in the coming years.”

For more than 35 years, Powell, a residential and commercial developer, has been a key figure in the growth of her hometown, Burleson, from a small Texas community to a burgeoning economic center with more than 40,000 residents.

Powell is the immediate past president of the Burleson ISD Board of Trustees. Next month, she will be awarded the Pillar of the Community honor by Hill College. The award recognizes her work with Burleson’s Higher Education Initiative, which has increased scholarship funding for Burleson’s college-bound students.

Texas Wesleyan also named Dan Boulware ’68 Vice Chairman of the Board of Trustees and John R. Murphey ’71 as Secretary of the Board.

Dan Boulware is a partner in the Law Firm of MacLean & Boulware, and has been a leader in the North Texas legal community for more than 40 years. He is Director of the Texas Legal Protection Plan and Chairman of the Advisory Board for the Texas District and County Attorney Foundation.

John R. Murphey served more than 40 years at Textron, operating companies in the U.S. and abroad. He served as President, and then as Chairman and CEO, of the Bell Helicopter Company until his retirement from Bell in 2004. Murphey was CEO of AgustaWestland’s U.S. operations until his retirement in July 2005. He is business-executive-in-residence for Texas Wesleyan’s School of Business Administration.

The Texas Wesleyan University Board of Trustees governs the University, which is the longest-serving higher education institution in Fort Worth.

Texas Wesleyan University
At Texas Wesleyan, we have a rich history and a Texas-sized reputation. As stewards of the University, it is our responsibility to build a future as bright as our past.
Upcoming Events
Mar
31
Flip Grid Workshop March 31
Mar
31
TxWes Reads presents The Boxcar: Piecing Together History
Mar
31
CANCELED - 2020 TAG Day
Apr
2
Ed.D. for an Evening April 2
Apr
4
New Student Registration: 10 a.m., April 4
Apr
4
New Student Registration: 12 p.m., April 4