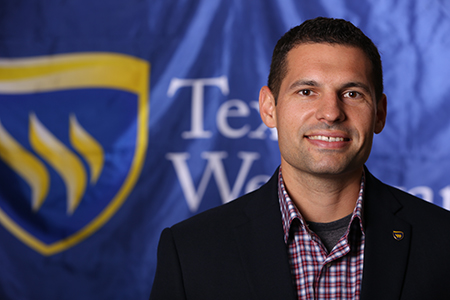 Brian Franks has been named executive director of facilities development and operations. In his new role, Franks is charged with providing leadership and strategic vision for facilities management, campus planning and construction, as well as overseeing campus safety.

“Brian is an excellent director and is well known on campus and in the community for his outstanding work, guidance and project management,” vice president for finance and administration, Karen L. Montgomery, said. “Brian has made an impact on our facilities department and the University as a whole; he will continue to play a key role as we work toward our 2020 Vision.”

Since joining Texas Wesleyan as director of facilities in June 2013, Franks has overseen numerous projects around campus, including extensive landscaping upgrades, the remodeling of Elizabeth Means and O.C. Armstrong Halls, the renovation of Dora Roberts Dining Hall and the Rosedale Renaissance construction projects. He has experience working with faculty, staff, students and various Board of Trustees committees to execute campus improvement initiatives.

Previously, Franks served as director of auxiliary services for Castleberry Independent School District. In his nine years with Castleberry ISD, Franks implemented facility plans to support the district’s Master Strategic Plan and represented the district through all stages of their 2010 Bond Program, which included the replacement of two elementary schools and security improvements to all campuses.

A search to fill Franks’ former position as facilities director will begin immediately. While the facilities department is getting fully staffed and getting several projects underway, the security department will report to the dean of students.