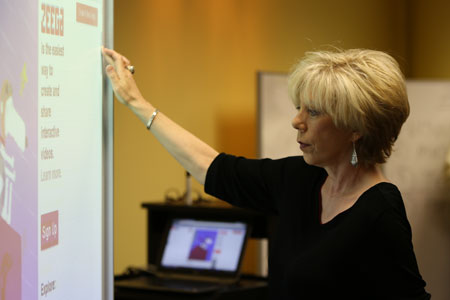 If you've ever wondered what it looks like to be an engaging educator who encourages critical thinking while helping build the university's Texas-sized reputation, look no further than Texas Wesleyan's mass communications department.

Over the summer, all three professors attended the "Teachapalooza" conference at the Poynter Institute in St. Petersburg, Fla., a three-day event billed as an opportunity to "catch up, power up and re-ignite your passion for teaching." A grant from the Center for Excellence in Teaching and Learning (CETL) covered the registration fees for Johnson and Cummings.

"For Terri and I, who aren't journalists and don't have journalism training, this was a great experience," said Johnson-Gerendas, who also attended a journalism "bootcamp" with Cummings in South Carolina in 2012.

"We learned about the various media that are being used by journalists in the field, but they also talked about pedagogy and how you might integrate it into the classroom. There was a lot about teaching involved in this conference."

"One of the things they told us was 'don't try to implement everything, just pick one.'" said Johnson-Gerendas. "So when we got back we thought, well let's each pick a different one and experiment with it in our classes and then we can compare notes and see what's working and learn from each other about our experiences."

Johnson-Gerendas opted for Twitter, and is using it as a back-channel for her classroom, as well as a tool to build community and enable students to do research. You can follow what they're doing throughout the semester by searching the #SpeechTXWes, #ASETxWes and #ICTxWes hashtags.

Colley, who was already using Twitter and Facebook in the classroom, will be implementing LinkedIn as a resume, network-building and job-search tool for her upper-level mass communication classes.

Cummings will use Flickr for her photography students later this semester. By sharing their photos, her students will not only be assuming a greater responsibility for their work, but they will be encouraged to think critically by starting discussions with the Flickr community and engaging with others on a global level.

"Essentially they're curating and thinking through what these things are," said Cummings. "They're also building a broader context of critique and professional networking."

The professors won't just be sharing their social media experiences with each other this semester.

All three will be presenting posters individually at the Southwest Education Council for Journalism and Mass Communications (SWECJMC) Symposium in Tulsa, Okla., on Nov. 1, and they will be be presenting as a group at the Texas Social Media Research Institute (TSMRI) Conference in Fort Worth one week later.

In addition, Johnson-Gerendas and Cummings were interviewed by Poynter and featured in a video produced by the institute, and were able to share that clip and their learnings from "Teachapalooza" with other faculty members at the CETL kickoff prior to the start of the semester.

"I think it's unique that the three of us went to training last summer and are submitting some of our research based on what we're doing," said Johnson-Gerendas. "It was really great for us to go because we also had opportunities to talk about the program and to bond and work together and think about our vision for what we're doing here."