Five new members join the Texas Wesleyan Board of Trustees 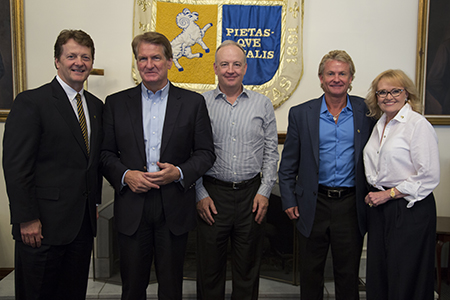 Texas Wesleyan announced this week that five new members will join its Board of Trustees, including two alumni who are now members of the U.S. House of Representatives.

The Rev. Ben Disney, Doug Compton, James E. DuBose, Rep. Kay Granger and Rep. Marc Veasey will join the Board, which governs the longest-serving higher education institution in Fort Worth.

"We are very pleased to welcome these new members to our Board of Trustees," Beverly Volkman Powell ’92 MBA ’99, Chairman of the Board of Trustees, said. "Each new member brings a diverse set of experience and expertise that will benefit the University as it continues to thrive."

The Rev. Ben Disney is Senior Minister at Arborlawn United Methodist Church in Fort Worth. Disney was appointed to oversee the creation of Arborlawn in 2005, which united two existing congregations. He has experience in church development and evangelism.

Doug Compton is the President of First Management, Inc., founded in 1991 and based in Lawrence, Kan. The company specializes in construction and property management. First Management is the largest manager of commercial properties in the downtown Lawrence area.

James E. DuBose is the President and CEO of Colonial Savings, a comprehensive, national financial corporation headquartered in Fort Worth with more than 800 employees. He is the son of James S. DuBose, who also serves on Texas Wesleyan’s Board of Trustees.

Marc Veasey ’95 is the sophomore United States Representative for the 33rd Congressional District. Elected in 2012, Veasey serves on the House Armed Services Committee, and the Committee on Science, Space and Technology.

"We are especially proud to see our alumni, Rep. Granger and Rep. Veasey, join our board," President Frederick G. Slabach said. "We often say our graduates go on to accomplish great things, and both Kay and Marc are proof of that."