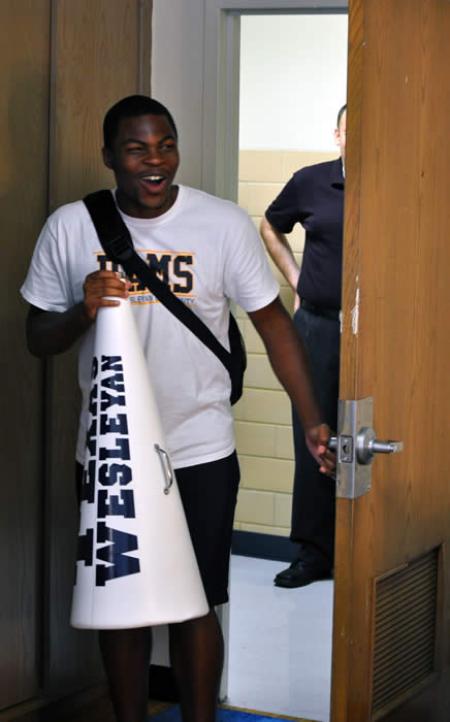 Texas Wesleyan freshman Micah Young was treated to room makeover today, thanks to Goodwill Industries of Fort Worth, Inc.

Yesterday, his room had a sheet on the bed and not much else. Today, his living quarters were adorned by a stylish black couch and ottoman, a coordinating bedspread, a television, chess set, and trendy glass accents. His decorations included record albums on the walls – and even a ram painting.

Young was thrilled at the makeover and reflected his youth when he asked, “Are these records?”

The much-anticipated unveiling was seen by his friends and many members of the media, including a reporter and photographer from the Fort Worth Star-Telegram, videographers from Channels 4, 5, 8, and 33, and on-campus outletsThe Rambler and Rambler TV.

A member of the cheerleading squad at Texas Wesleyan, Young won the redesign by entering an essay contest, and to have the décor provided by Goodwill has special meaning to him. “When I was younger, after my mother died, my grandmother would buy my clothes from Goodwill,” Young said. “Now, several years later, I am so excited to have my entire room furnished by Goodwill! In the past few months, everyone has been pushing me to attend college at Wesleyan and I believe being selected to receive Goodwill’s Decorate a Dorm room makeover is the cherry on top.”

Young’s life has not been without bumps in the road. He left home at an early age and was involved with the wrong crowd by the time he was 14. But he never lost sight of his goal to succeed.

“Broke, homeless, and helpless, I had no idea what to do. I clung to my desire to not be a failure in life” said Young in his application essay. “I had to structure the person I wanted to be and get my life on track. I had come too far to let what I had fought for go to waste.”

After completing high school and trying one semester at a community college, Young sought advice from several friends, including a 2011 Texas Wesleyan graduate. After visiting the campus and learning about the school, Young knew Texas Wesleyan had the rules and structure he needed. Wesleyan provided him with a real chance to succeed.

Goodwill’s mission of giving back to the community and providing opportunities for deserving individuals fits well with Texas Wesleyan University’s mission: To develop students to their full potential as individuals and as members of the world community. Such common goals make this venture a successful partnership. This is the second consecutive year that Goodwill has awarded a makeover to a deserving Wesleyan student.

Read more about Micah in the Star-Telegram article or watch the story on WFAA.