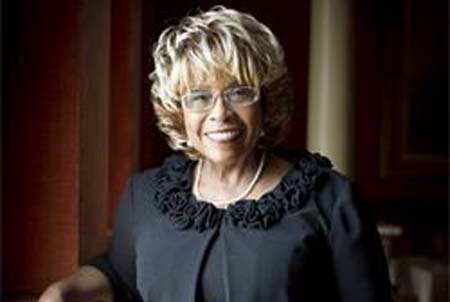 Fort Worth City Council Member Gyna Bivens, who was sworn in Tuesday night, is excited to represent southeast Fort Worth. In a recent visit with President Frederick G. Slabach, she shared her enthusiasm for the revitalization efforts in this area of the city, especially as efforts continue to move eastward from Council Member Kelly Allen Gray's district into the far southeast side of Fort Worth, bringing jobs and sustainable economic development.

During the visit, Slabach had the opportunity to share the university’s master plan with her and to discuss Texas Wesleyan’s involvement in the Rosedale Renaissance.

“It was heartwarming to hear Council Member Bivens recall her days at Texas Wesleyan and time spent in classes with Dr. Alice Wonders.  Council Member Bivens shared that both she and her mother often remember Dr. Wonders during their Sunday school classes. We look forward to working with her and our other civic leaders as we continue to improve Southeast Fort Worth,” Slabach said.

Bivens currently serves as the Executive Director/President of North Texas LEAD, a nonprofit helping major employers recruit diverse professionals skilled in a variety of fields. During this visit, Bivens also shared her family ties with Texas Wesleyan, including her freshman year of college, when she majored in journalism. She realized that her true calling was radio, film and television, so she transferred to North Texas College to pursue her degree before spending many years in the radio and television industry.

Texas Wesleyan is a family tradition

Bivens mother, Betty J. Bivens, first attended Texas Wesleyan in the mid ‘60s when Gyna was in elementary school and her younger brother was a toddler. In the mid ’90s, after two more children, Betty Bivens resumed her studies by taking weekend classes and graduated in 1999 with a BS in Interdisciplinary Studies. She then taught kindergarten for two years before retiring from the Fort Worth ISD after 27 years of service (the first 25 years were in the clerical field).

Bivens sister, Melanie Bivens, also a Wesleyan alumna, graduated in 1998 with a Bachelor of Music Education. Melanie taught at FWISD for more than a decade, served as musical director at Jubilee Theater & AART (founded by Irma P. Hall), and at Houston ISD as a fine arts teacher.

Texas Wesleyan University
At Texas Wesleyan, we have a rich history and a Texas-sized reputation. As stewards of the University, it is our responsibility to build a future as bright as our past.
Upcoming Events
Dec
3
Transition to Teams for Virtual Class Sessions 12/03
Dec
3
CETL Coffee Break 12/03
Dec
3
TXWES Eats: Holiday Edition
Dec
4
Roundtable: Ingenuity in the Classroom 12/04
Dec
9
CETL Lunch Break 12/09
Dec
14
Transparent Assignment Design 12/14