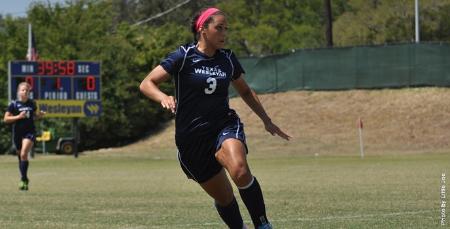 The Sooner Athletic Conference (SAC) announced its preseason women's volleyball, women's soccer and men's soccer poll, and Texas Wesleyan was picked third in all three sports by the league's 10 head coaches. Here's a quick preview of their 2014 season.

The Lady Rams finished the 2013 season with an overall record of 19-18. In their first season under head coach Kimberly Weaver's direction, the team featured seven All-Conference selections including the SAC Libero of the Year, one All-American, and one NAIA Scholar-Athlete. The Lady Rams posted a 10-6 record in their first season in the SAC and reached the semifinals of the conference tournament.

Texas Wesleyan will open the 2014 season at the Oklahoma Baptist Tournament in Shawnee, Okla., Aug. 22-23. Their first home match is scheduled for Aug. 26, when they host Texas Woman's University at 5 p.m. They will open SAC competition on September 16, when they host Mid-America Christian University.

The Lady Rams finished the 2013 season at 12-5-2 overall, while making it to the semifinals in their first year in the SAC. The team was ranked as high as 22nd. The Lady Rams also touted three scholar athletes and four all-conference selections, while setting a new school record with 16 goals allowed, a goals against average of 0.81 and tied the school record with nine shutouts.

The Rams will kick off the season on Aug. 23, at Howard Payne University. Their first home game is scheduled for Aug. 31, when they host NCAA Division I Abilene Chrisitan University at 1 p.m. They will open SAC play Sept. 26, when they host St. Gregory's University.

Last season, Texas Wesleyan was ranked as high as 16th nationally, finishing the at 13-6-1 overall. Their 13 wins were one shy of the school record, while they set a new single season mark with eight shutouts. In their first season in the SAC, they featured three All-Conference players as well as two All-Region, one Scholar Athlete and an All-American selection. The team notched a conference record of 6-4, finished third in the SAC standings and reached the SAC semifinals.

The Rams are set to begin the 2014 season Friday, Aug. 22, at the University of Auburn Montgomery. Their first home game will be played Aug. 29, when they host Oklahoma Wesleyan at 7 p.m. They will open SAC play on Sept. 26, when they host St. Gregory's University.