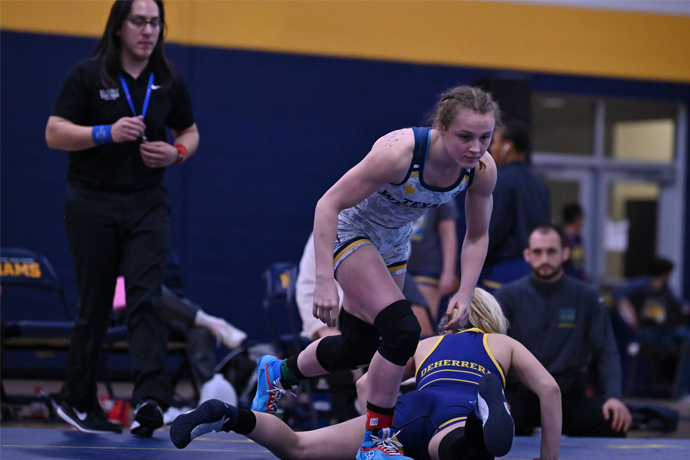 Under the big lights, junior Lexie Basham showed the world why she is one of the best in the business.

In the U23 Women’s Freestyle World Championships held in Pontevedra, Spain, Basham put up a fight from start to finish. She started by defeating Karoline Ortiz Rosado of Puerto Rico in an 8-4 decision that saw Basham leading the entire match. In the quarterfinals, Basham took on Anne Beatrice Nurenberger of Germany — pinning her 5 minutes and 44 seconds into the bout to claim a 5-0 victory.

In the semifinals, Basham saw her run end at the hands of eventual U23 59kg World Champion Himkea Tokuhaha, marking Basham's first loss in the competition.

Due in no small part to her national title and her performance in the World Championships, Basham picked up the #1 ranking in the NAIA preseason poll for the 130lb class. The Rams also picked up a #6 ranking in the team polls.

Lexie Basham is a force to be reckoned with in the world of women's wrestling. The 5'4" junior from Roanoke, TX etched her name into the Texas Wesleyan history books — her 31-2 performance in the 2021-22 season set school records for single-season wins and single-season win percentage. She capped off her season by taking the Sooner Athletic Conference 130-pound title and ended her season with a storybook upset over top-seeded Nanea Estrella of Menlo College (CA) to win the NAIA National Championship — Texas Wesleyan Women's Wrestling's first national title.

After taking on the best the NAIA had to offer, Basham was named to the 2022 U.S. Senior National Women's Freestyle Wrestling Team, taking the #2 spot in the 59kg class behind Abby Nette. Basham wrestled a tight match with Nette, eventually falling in a 5-8 decision.

In addition to her place on the Senior National Team, Basham was named as the #1 wrestler for the U23 team. She will represent Team USA in the Under 23 World Championships in Pontevedra, Spain beginning on Oct. 17.

Basham is no stranger to success. Entering the 2021-22 season, she picked up a 4th place ranking in the NAIA Preseason Poll — and she more than exceeded that ranking. After storming to a 28-2 regular season record, Basham rolled through the SAC Championship as she defeated Wayland baptist's De'anna Price to snag the 130-pound title.

In the NAIA Championship, Basham upset top-seeded Nanea Estrella of Menlo College to pick up Texas Wesleyan's first-ever national title in women's wrestling. On her road to the national title, Basham picked up weight class wins or tournament championships in 10 of the 12 matches in which she wrestled, and racked up an impressive 22 wins by fall (pin) or technical fall (wrestling's version of a mercy rule).) In her season, Basham outscored her opponents by a combined total of 194-18.

Basham had already secured her place in the record books at the beginning of the 2021-22 season. Her 2020-21 season started with her only loss — a fall at the hands of eventual 142-pound SAC Champion Desiree Zavala of Wayland Baptist. After shifting to the 136-pound weight class, Basham never looked back — racking up a 7-match win streak that was good for the 3rd-longest streak in program history at the time.

In a typical picture-perfect ending for Basham, her final match of the season rematched her against Zavala — and this time, Basham came out on top, scoring a win in just 21 seconds.

Basham and the Rams kick off their 2022-23 season on Nov. 5 at the Falcon Invitational in Park City, Kansas.