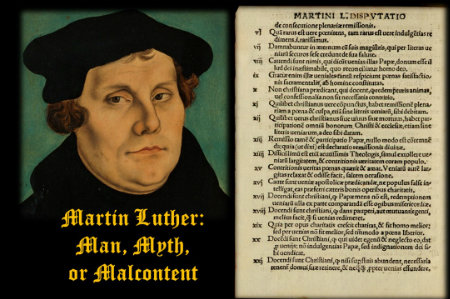 Join us for the Mitchell-Reed Community of Learners lecture Martin Luther: Man, Myth, or Malcontent at 12:15 p.m. on Tuesday, Oct. 31 in the West Library Orientation Room.

This presentation by Alistair Maeer, assistant professor of history, and Christopher Ohan, associate professor of history, will commemorate the 500th anniversary of the start of the Protestant Reformation, which began when Martin Luther “nailed the 95 Theses” to the door of the Castle Church in Wittenberg. It will differentiate the various historical roles played by Martin Luther, from the concept of his seeming heroic theological role in the Reformation to his more pragmatic political, secular, and egocentric side.

Brown bag lunches are welcome; light refreshments will be provided by the Office of the Provost. For more information about this event, contact Elizabeth Howard. Visit the West Library Facebook page.

Maeer has 18 years teaching experience, beginning as a Middle school teacher at St. Alcuin Montessori School in Dallas, Texas. He joined Texas Wesleyan in 2016 from Southeastern Oklahoma State University where he was associate professor of history and director of social studies education.

Maeer presents on teaching and various Atlantic history topics and is the author of several articles concerning the history of maritime cartography. He is currently writing a book on English expansionism and empire in the 17th century. As a teacher, Maeer believes that students should confront differing and competing stories (voices) of the past directly and as ongoing reflections of the present. In effect, educators should continuously highlight the dynamic forces at play in history and today, rather than flat, even stagnant, explanations of events.

Ohan is associate professor of history at Texas Wesleyan University. Before coming to Texas Wesleyan in 2014, he lived and worked for 8 years in Kuwait serving as Chair of the Department of International Relation at the American University of Kuwait. He was a Senior Fulbright Fellow at the Moscow State Institute of International Relations where he spent nearly three years gathering life histories, which focused on the end of the Soviet period.

In 2008 he participated in an NEH Summer Institute with William Cook to study the early Franciscan movement. His most recent publication is a chapter entitled “Reconsidering Francis’ Encounter with the Sultan during the Fifth Crusade,” in The World of St. Francis (Franco and Mulvaney eds, Betti Editrice, 2017) and his articles have been published in Franciscan Studies, Logos: A Journal of Catholic Thought and Culture, History and Anthropology, and Journal of Educational and Social Research.